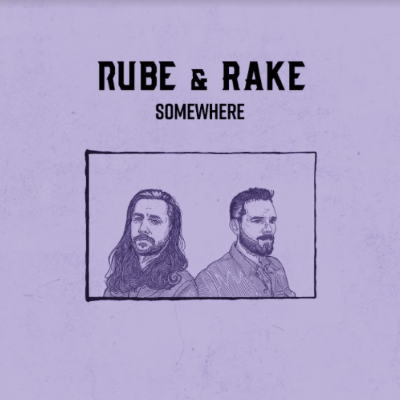 “Somewhere” is the third single the duo, fronted by Josh Sandu and Andrew Laite,  have released this year. The track “oscillates between songwriter Joshua Sandu’s hometown of Prince George, BC and his adopted home in Newfoundland on the opposite end of the country.” According to Sandu, “My partner and I bought a house, and the first song written in it was about leaving. After moving from one coast to the other, I found myself finally settling down. Still, Canada’s eastern shore hasn’t brought the peace that it was thought to provide. Though I will remain in Newfoundland, my heart will always yearn to be back home.”

“Somewhere” comes after the release of the singles “Fleeting Moment” and “What Will”, as well as “an extensive tour of Newfoundland undertaken with Home Routes, a not-for-profit organization that creates new performance opportunities for musicians and audiences in rural, remote and urban communities across Canada.”

These new tracks mark the first music from Rube & Rake since their debut album, Back and Forth, in 2017. This album earned the duo “multiple Music NL Awards, national charting, and appearances at such events as Folk Alliance International [and] Lawnya Vawnya” just to name a few. Keep listening for more information about the release of their latest album. It’s sure to be a treat!