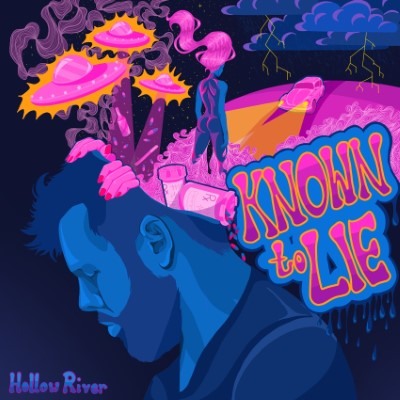 “This song is basically from the perspective of a liar, and that framing allowed me to take the song to some really creative places, lyrically,” says the man behind the moniker, Mark MacDonald. “It’s hard to tell which lines mean a lot and which are nonsense, which is a skill the best liars have mastered.”

Check out “Known To Lie” below and find out more about Hollow River via our Five Questions With segment.

Hey friends, my name is Mark MacDonald and I’m a Canadian/American songwriter and producer by the name Hollow River. I picked up the guitar when I was 8 and learned a number of other instruments as my musical fascination grew.

When I finished high school I got an English Lit degree and worked for a craft brewery through school, but got to the end and decided I didn’t want to sell beer or go to teachers college.

I felt that if I didn’t try and take a real swing at what I really wanted I would regret it down the road. My dad calls it “the rocking chair moment”. When you are eighty and thinking back on this moment, are you going to be proud of the risks you decided to take while you could?

So after I finished school I moved back home with my parents and volunteered at Grant Avenue Studio in Hamilton learning about the art of recording. A year and a half after that I was accepted into Berklee College of Music in Boston. I was there for three years before returning back to Canada in July 2020 because of the coronavirus.

It feels like a role I stumbled into by accident, but people describe me as a Pop-PunkRapper. I have a number of great songwriting mentors in Boston, but most notable is my teacher (and friend) George Woods. He was my first songwriting professor for a series of classes specifically about lyrics.

Meanwhile, I’m coming from the literary/poetry realm. I felt as if I already knew enough about the lyrical part of songwriting but I was wrong. The meaning of my songs were often lost due to the density of the lyrics.

“You got too many words”, George would often tell me after the end of class or an open mic performance. “People cant understand what you are singing. You need to cut some words.”

But I like words. I feel my lyrics are one of my strongest assets. So instead of cutting words from my melodies, I cut the melody from my words. Live audiences responded immediately to the change in direction, and I knew I was heading in the right direction after George was bragging to another songwriter about my pivot after a live performance of mine.

Outside of my solo career I also get to enjoy my role as producer which allows me to work in a variety of styles with a number of different artists. It’s very fun.

Live performances are largely on hold for the moment because of the virus, but I am always most comfortable in the studio anyway so I have some plans for some fun live streams this summer and beyond.

In a normal world, I play with two amazing musicians who are good friends of mine from Berklee. LJ Trotta is a kickass drummer and kills it in our live show. On bass we are lucky when Brad Williamson has time in his busy schedule to play, but when he does its great. Brad’s the best bass player I have ever seen with my own two eyeballs.

However, due to the fact that my bandmates are all American, my Canadian shows tend to be a lot more of a solo performance. Me and an acoustic guitar, singing and rapping fast. While playing with a band is fun, I think this is an environment I really thrive in. It’s intimate and the vibes are hard to match.

My single ‘Known To Lie’. I had a lot of fun playing with the lyrics. It’s from the perspective of a liar so it gave me room to do some fun things.

Pup and Texas King have been in rotation the past few weeks a lot, but deep down I’m just a Dallas Green fanboy. Alexisonfire, City and Colour, if Dallas Green is involved I want to hear it.