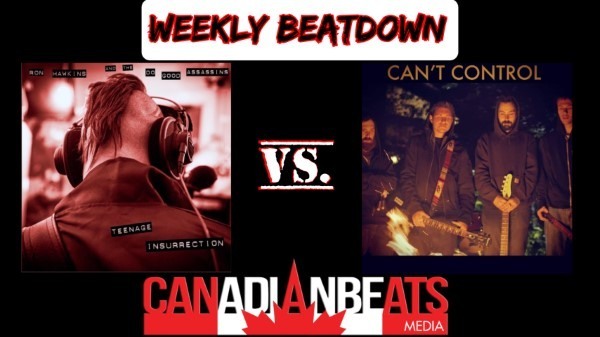 Happy music Monday, it’s another great day for some new music!! Of course, the Weekly Beat Down is here to give you all that fix of that good music. Two amazing songs will be facing off and I’ve got four recommendations also coming up on the brand new episode below.

Here on the Weekly Beat Down, you the fans will be voting for your favourite song on this site right here. Going from Monday to Saturday night, the song with the most votes will be the one preceding on to the next round. And quite possibly be inducted into a very special club called the Weekly Beat Down Hall of Fame! So let’s get things started with our first song up to bat for you lovely music fans.

They have been absolutely taking out every competition we could throw at them for the last 6 weeks in the row. Toronto party rockers Bad Holiday have returned with the song that just can’t be controlled, it’s “Can’t Control”. This could quite possibly be their Road To Victory and induction into the Weekly Beat down Hall of Fame next week. You can also keep an eye out for their new song coming out on July 31st, called “Shoulda Never Gone” which I’ve had the privilege of getting a sneak peek at the new video. If you want to see a sneak peek of that new song, well you better cast your votes for Bad Holiday on the Weekly Beat Down at the bottom of the page. Now you can enjoy the full video for “Can’t Control” below.

Next up we got an amazing artist also hailing from Toronto, multi-instrumentalist and singer-songwriter Ron Hawkins and the Do Good Assassins will be jumping into our competition this week. They recently released the new single and excellent video for “Teenage Insurrection” on Canadian Beats. This is going to be the first single coming off their forthcoming album 246, coming out on all streaming platforms August 28th. With the change in times, Hawkins was not able to film a full-band video as originally planned. However, this did not stop him from making do and putting out an amazing video for you guys. If you guys like a new song “Teenage Insurrection”, be sure to go cast your votes at the bottom of the page as well as checking out the full video right here.

Those will be the two amazing songs facing off for your votes down here. The one counting with the most votes is going to be our winner and moving on to the next round. Be sure to get your votes in from today Monday, all the way until Saturday night.

That is going to be it for the Weekly Beat Down, so I hope you enjoyed and maybe found some new music you like. I hope you all have yourself an amazing week and stay positive out there. Peace, Love and Good Music everybody!!