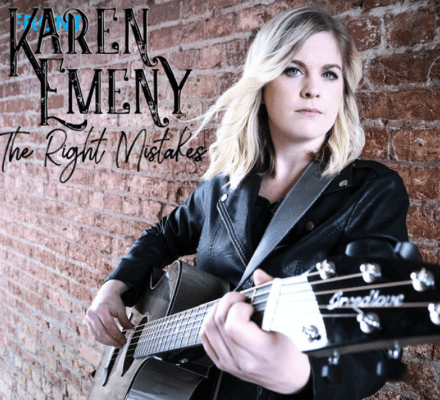 This is one of those releases where I had to stop and consider which genre to file it under. On The Right Mistakes, London Ontario’s Karen Emeny straddles the boundaries of pop, rock, and country, but in a way that doesn’t come across as conflicted. These styles are well-blended on the EP, though certain songs or moments of them lean a bit further in one direction than another.

On either end, you have the more rocking jams “Meant for This,” with its guitar-crunching verses, and “Hard Love,” its big-sounding choruses framed for emphasis by contrasting acoustic instrumentation. Each of these songs also contains some semblance of the country and/or pop vibes that become increasingly apparent toward the EP’s middle. Moving inward, there is “Just a Little Heartbreak,” country-esque in the buildups to its motivating hook, and “Someone Else,” a ballad-like track rendered powerful by its moody violin and chanting backup vocals. Finally, at the centre, “Storm Chaser” makes for an especially pop-oriented core, being upbeat and catchy the whole way through.

It all harkens a bit too similarly styled music of the 90s and early 2000s and is enjoyable as such. Whatever mistakes Karen Emeny might have made leading up to this release, I suppose they must have been the right ones if they had anything to do with its creation, because The Right Mistakes presents as a positive accomplishment.