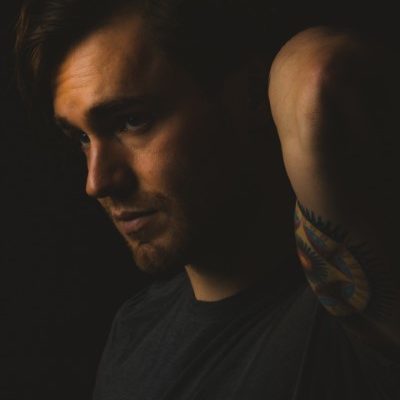 What started as poetry at a very young age has turned into hundreds of songs for Calgary-born, Aaron Pollock. With the release of his latest single, “I Don’t Drink Whiskey Anymore”, Aaron’s getting especially personal as he shares a life-changing decision while also encouraging the listener to “get rid of bad habits, whether those habits come in a bottle or they’re people that shouldn’t be in your life.”

You recently appeared in a commercial for Cadbury Dairy Milk’s  “Contagious Generosity” campaign; what was the biggest takeaway from that experience?

The performance featured in that commercial was one of the more special experiences I’ve had as a musician. We filmed that segment on my parents’ block in Calgary, and at that point, their neighbours had virtually not left their homes in months. People were so appreciative of the chance to experience live music again. I’ve never felt so valued as a performer. That show really reaffirmed my faith in music’s ability to create community. I’m so happy that moment in time was captured, and humbled that I had the opportunity to be a part of such an amazing initiative.

With hundreds of songs in your catalogue, what are your earliest songwriting memories?

As a young child, I developed a real passion for reading and writing. I started writing short stories in elementary school and was blessed to have teachers that encouraged me to express myself and develop my craft. In grade 6, my teacher gave me a book to write poetry in. I was super into Edgar Allen Poe at that age, so the poems were generally kind of dark and weird, but that poetry book birthed Aaron the songwriter. It wasn’t until years later that it occurred to me to apply this skill set to my other passion: music.

Was there a particular instance that inspired your new single, “I Don’t Drink Whiskey Anymore”?

There’s a pretty interesting and unexpected story behind this one. I wrote this song with three of my best friends. After twelve years of marriage, one of them went through a painful divorce a few years ago. About a year after this happened, he was on the up-and-up and got an out of nowhere text from his ex-wife. They used to drink whiskey together, and she’d sent him a picture of a new brand of whiskey she thought he’d enjoy. My friend was pretty taken aback by this because they hadn’t spoken in a year, but also by the fact that he hadn’t had a drop of whiskey since the divorce (he’d moved on to red wine). This random text dawned on my friend that he’d emerged on the other side of his debilitating heartbreak as a new man, one his ex didn’t know anymore.

Coincidentally, I decided to quit drinking almost three years ago and in chatting about this story, we decided to write a song about how empowering it is to get rid of bad habits, whether those habits come in a bottle or they’re people that shouldn’t be in your life. To end this story on a light note, I’m happy to report that my friend and co-writer is blissfully remarried (to one of the other co-writers of this song)!

Having already had the chance to share the stage with fellow Canadians Jann Arden, Brett Kissel, Jocelyn Alice, and Shawn Hook…what other artists would you still like to add to the list (Canadian or otherwise)?

HARDY is at the top of my list right now. Stylistically, we’re a little different, but I am in absolute awe of his craftsmanship. I would love the chance to learn from him. Also, his shows look like a ridiculous amount of fun. With regard to Canadian artists, I’d love to share the stage with The Arkells. They have such fun songs and are a killer live act. I’ve met them a few times and they’re salt-of-the-earth dudes.

Although performing came to an abrupt end when the pandemic hit, the songwriting never stopped. My number one priority is always to continue to write the best songs I possibly can. Aside from that, I’ve begun working on my next few singles. I’m starting to book more and more shows as the pandemic deescalates, but no matter what happens on that front I have more new music to release and look forward to doing so. My next singles are all different from songs I’ve previously released and from one another. I can’t wait to release them.

Lastly, I wanted to thank you for your time and for the awesome interview! I really enjoyed answering all of your questions and getting to talk about what’s important to me as an artist and a songwriter. I sincerely appreciate it and wish you all the best.