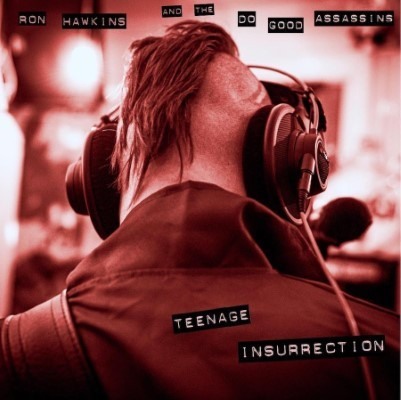 Singer, songwriter, and multi-instrumentalist Ron Hawkins has released his latest single, “Teenage Insurrection” with the Do Good Assassins. This track is the first single from their forthcoming self-produced album, 246, set to be released on August 28.

“Teenage Insurrection” is described as “a call to every human to tap into that insurrectionary energy we had access to as 16-year-olds.” Hawkins challenges us “to put a shoulder to the wheel and do positive things in our lives.” Hawkins explains, “I feel like the excitement, earnestness, and drama of our early teenage years is packed with the kind of inspirational energy that we sought to capture with the organic buzz of this song.”

With the change in times, Hawkins was not able to film a full-band video as originally planned. However, this did not stop him. Hawkins “reverted to what he would have done at 10 years old…pick up a camera (in this case his daughter’s iPad) and make a stop motion animated video.” He dedicated over thirty hours to this creation, tirelessly working on the “playful, nostalgia-filled video for the new single that premiered via UK outlet XS Noise.” As Hawkins explains, “Necessity, as they say, is the mother of invention. And never more so than in a global pandemic.”

“Teenage Insurrection” is the first single from Ron Hawkins and the Do Good Assassins’ album that is set to be released in August. According to Hawkins, “246 was recorded on a 1985 Tascam 246 4-track cassette recorder in drummer Jody Brumell’s living room with an overarching ethos of, ‘all analogue, no digital tomfoolery’.” This allowed Hawkins to reminisce about some of his earlier recordings. “Recording on the 4-track brought memories rushing back to me; the same excited urgency I felt when I first recorded on the exact same Tascam 4-track back in 1985 writing my first awkward songs. The smell of head cleaner and that magical ozone smell from the capstan and the mechanical parts transported me to a time when I first fell in love with music and its endless possibilities,” Hawkins explains. The group did not haul out all the typical recording and production gear that many are used to using today in order to produce this album. Their main idea was to “make a record with extreme limitations; just four humans making music in a room with no bells and whistles.” Hawkins carried on this trend and decided to independently release this project. According to Hawkins, “The good people at Warner were excited to put out the new record, but faced with the prospect of not being able to manufacture physical copies or doing live shows to support the release, I figured I would go the Indie route.”

Hawkins is no stranger to the Canadian Music Scene. Since 1991, he has “written and released eighteen albums, recorded in big old-school studios, in live venues, in barns and in his house.” Many of these have been with musical groups he has been a part of, along with a few solo releases. With an already impressive career behind him, Hawkins’ latest project should be a memorable one.

Share this:
Related Items246CanadianDo Good AssassinsListen Harder PRRon HawkinsTeenage Insurrection
← Previous Story Crown Lands pay tribute to the missing and murdered Indigenous Womxn, Girls and Two-Spirits with Emblematic single, “End of the Road”
Next Story → Chladny releases new single “Can You See It On My Face?”