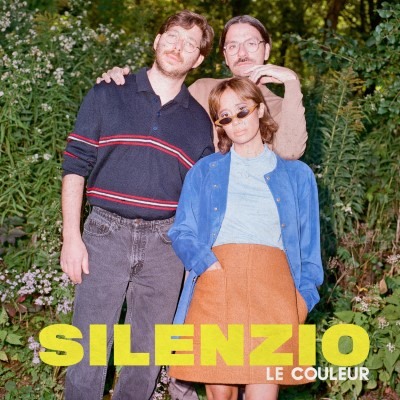 The trio is comprised of Laurence Giroux-Do (vocals), Patrick Gosselin (bass), and Steeven Chouinard (drums), with the addition of Philippe Beaudin (Percussions) and Francis Do Monte (guitar, keyboards) during their live sets to “deliver rich and irresistibly danceable performances.”

According to Le Couleur, “Silenzio” is a song “about ‘death on the prowl,’ depicted as a mafia betrayal that ends with ‘il bacio della morte’ (the kiss of death). Life and death is a powerful duality, but try as hard as we might, there’s no escaping the latter’s inexorable victory.”

In order to create the live-at-home series, Le Couleur got “an HD camera from the mid-2000s and did a home shoot.” According to Le Couleur, “Everyone, except Laurence, were filmed in Le Couleur’s recording studio. It took a week to record the whole thing because we did it one by one. The longest 25-minute show ever! We had no choice but to have Charlie, (Laurence and Steeven’s child) for the Laurence shoot – due to the fact that the daycare was closed. She absolutely wanted to do everything her mum did (lie down, sing, play synthesizer, dance, etc…).”

“Silenzio” is the third single (with the tracks “Femme” and “Concorde” being released previously) from their forthcoming album, Concorde, set to be released on September 11 via Lisbon Lux Records. This album is said to “get back to basics”. Recorded live in the studio, Concorde is “an album with a deliberately vintage sound, recalling the golden age of Serge Gainsbourg, ABBA, and even Fleetwood Mac.” Throughout this album “Le Couleur show a highly refined mastery of French chanson, with rich vocal harmonies, while making room for melancholy, sensual, and sometimes epic instrumental passages.” Ultimately, Le Couleur can describe their upcoming album as “the place where 70s pop, psychedelic soundscapes, and straightforward and uninhibited French chanson come together.”

Interested in hearing more? Check out the band’s socials and forthcoming album set to be released this September!