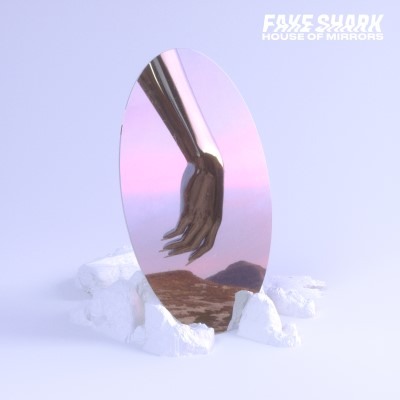 House of Mirrors is the third album from Vancouver based band, Fake Shark.

House of Mirrors isn’t shy about going for the throat. Its songs are funky, punchy, and aggressively upbeat, but with a tinge of violence. You can almost feel it tugging on your arm to pull you off the couch to start dancing. The album primarily uses male vocals, but the surrounding accompaniment of backing female vocals, drums, guitar base, and synths share as much of the spotlight to build up the power to the max. What is perhaps most impressive is how the album indulges in many styles while maintaining its identity — for example, some songs veer into dark synth, some mimic the pop stylings of Prince, some almost sound like Motown, but they are all unequivocally unique to Fake Shark’s style. Fake Shark says that House of Mirrors is about the “inner turmoil coming to the surface because everywhere you look you see yourself and the things that you should probably address about yourself” which rings true as House of Mirrors is fit to burst with energy.

Standouts on the album to me are “Something’s Gotta Give” and “Killing Me”.

“Something’s Gotta Give” is just pure fun that put me in the mind of early 2000’s brit-pop — but without the saccharine sweetness as the song is about venting repressed rage. Here the vocals are almost shouted, especially in the chorus, as if encouraging the listener to sing along with its universal theme of being fed up with someone who is insufferable. As the bridge cheekily repeats “You’re hanging by the end of my rope,” it encourages the listener to shout the same to the object of their frustration.

“Killing Me” has a Motown vibe with great chaos and momentum that makes it feel like a train about to come off the tracks. What particularly drew me to this track was how the lead singer jumps around his vocal register to great effect. The song starts with him singing in tenor to vocalize the factual circumstances of a failed relationship (how they met, where they lived etc.), till he can’t seem to hold back his emotion and break into falsetto to express just how much he was affected by the breakup. The effect is heartbreaking and combined with the speed of the drums and sweeping violins imparts just how this pain and its associated bedlam is ‘killing’ the singer, and fast. Yet, despite its darkness, ‘Killing Me’ still keeps the energy and fun of the rest of House of Mirrors as the song revels in its own anarchy.