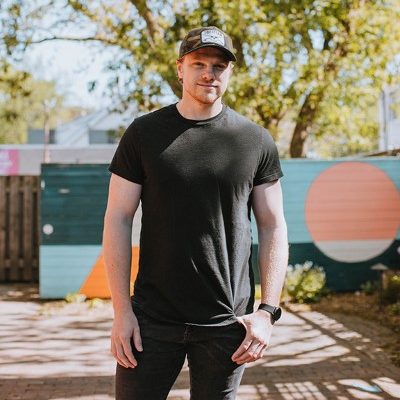 Canadian country-pop artist, Greg Rider has released his new single, “One Town Away”.

“This song was actually written in two days,” Rider recalls, looking back at a songwriting session with collaborator Rich Cloke. “I didn’t plan it at all.

I was a bit stuck,” he explains. “I had songs that I couldn’t release yet, so William Gaboury — producer and owner of Father & Son Records — suggested I write something new and come visit him in Montreal that same weekend to record everything.

It all happened so fast… Within four or five days, everything about ‘One Town Away’ was done!”

This song’s particular process may have been quick, but the concept had been percolating in Rider’s mind for years — albeit subconsciously, for the most part.

“This is the first song inspired by my roots,” he shares of growing up in Waterdown, suburban-meets-country town about an hour east of Toronto. “I was always running away from my hometown, and running towards new opportunities.

Those county lines could never keep me for long.”

Check out “One Town Away” below and find out more about Greg via our Five Questions With segment.

I’d be happy to. My full name is Greg Rider Farrell and I hail from Waterdown, Ontario. I was born in Mississauga but moved to the small town when I was 3.

Growing up, I was always rambunctious and full of energy. I loved playing sports and running around the neighborhood with my friends. In school, I was the class clown. Teachers either loved me or feared me. I loved being the center of attention and always found a way to have the spotlight on me. I was either asking ridiculous questions, pulling pranks, or disrupting the class with remarks. Throughout high school, not much changed. I calmed down a bit, but I was still known to be a little bit of troublemaker. I always got the infamous line, “Greg, if you applied yourself, you could be a really smart student”. I always had a hard time focusing and would rather doodle on my notepad or write down new ideas. I really didn’t like school. I had no idea what I wanted to do with my life and I was a senior. All my friends were applying for universities and I still had no clue.

I sat down with the guidance counselor one morning and she was asking me questions about my future. “Greg, what are your passions?” I told her “Playing sports”. She said, “Could you talk about them?”. I said, “Yes, of course”. She said, “Why not look into sports broadcasting?”

That was a great idea. I watched SportsCenter every morning before school and loved being on camera. I thought that was my dream job. I was so happy that I found out what I wanted to do. I felt this weight get lifted off my shoulders. I started researching schools and got accepted to study TV Broadcasting at Niagara College and I was scouted to play Volleyball there as well. It was the best of both worlds. I got to play sports and talk about them.

College was a great experience. I probably took volleyball more seriously than the program and I never turned down a party with friends. Again, I could have applied myself more, but after learning more about the industry, I started falling out of love with the idea of being a broadcaster. I wanted to make more of a difference and I felt there was more to me than just sports. I graduated from the program and started an internship in Toronto that I needed to do so I could graduate. I liked the people in the office, but they made me do all the grunt work and I didn’t feel like I was learning much about broadcasting. I could make a mean cup of coffee though.

On my way home from work one day, I got into a car accident that could have been way worse. I was driving on the highway and got distracted from my radio and didn’t notice the car in front of me came to a complete stop on the highway because they got cut off. I looked up, slammed on the breaks, and slid 20 feet into the back of the car. My airbag deployed and I blacked out for a couple of seconds from hitting my head on the steering wheel. When I came to, I was sitting in my car covered in black smoke. My first instinct was this car was going to blow up, so I jumped out to get to safety. No one got injured in the crash, but my car was a write-off.

After the crash, I fell into a deep depression about my life. I was so confused and had no idea what I would do with my life. I lost interest in broadcasting and I felt I wasted 3 years of my life in college. I found a book one day at Chapters that would change my life and begin putting me on the right path and it was called “Stop Worrying & Start Living” by Dale Carnegie. This book developed a passion for reading personal development and goal setting. I wanted to create a life I could be proud of and I never liked being told what to do. I began jotting down my dreams and how I see my life panning out. I started seeing myself on a stage in front of thousands of people. I had no idea what I was doing on the stage, but people were cheering and I had this giant smile on my face.

One day, I was with my grandmother and we were watching Oprah and her guest was Tony Robbins. I never heard of him before, but when he took the stage, people were glued to his every word. It was like he had them in a trance. I turned to my grandmother and said, “That’s what I want to do”.  That was my first dream. To be a motivational speaker. My next problem was, I had no idea what I would speak about. I felt I didn’t have a story that people would care about, so after years of self-doubt and thinking I wasn’t cut out to be a speaker, I asked my mom for a guitar so I could teach myself.

I was always singing around the house, in cars, in the shower, but never thought I’d actually want to make a career out of it. It wasn’t until I did my first open mic performance in Montreal at 24 when I finally said “Ok, that’s what I want to do”.

I aim to inspire people with my music. I want to write about my stories and sing about my struggles. I never wanted to just be a country singer that sings about trucks and break-ups. I never had a truck or had my heartbroken, so why would I pretend to be someone I’m not? I sing about things I know.

Music is a great way to get your message across and I want to say things in my music that other people can’t say themselves. I fell in love with country music because of the storytelling. One of my favourite songs is “Don’t take the girl” by Tim Mcgraw or “Sarah Beth” by Rascal Flatts. That music is so raw and real and pulls at your heartstrings. I want to do that with my music or at least make you think about your own life.

All of my shows were canceled due to COVID, but I’m starting to get called again for patios and private parties which are always fun. For someone who has never seen me live, I would say I do my best to include everyone. I love to use banter and include the audience. I don’t just sit up there and play one song after another. I find that boring.

One of my favourite things to do is ask a group of people to yell out a bunch of different topics and I’ll turn it into a song on the fly or if someone has a birthday, I’ll put their name in the song and that always draws a smile from the person or their friends. I love to make people smile and laugh and I’m not afraid to make myself look like an idiot to do so.

I can answer this in two ways. If they are looking for the highest quality song, I would say stream my new song “One Town Away”. William Gaboury is an incredible producer that crushed that track and made it stand out.

If you want to hear a song about my favourite message, I would say listen to “Baby Girl” because it touches on how I used to treat a woman in college and how that will change when I’m finally ready to have a kid.

I used to objectify women and look at them as a challenge, but as I grew up, I started to see them for much more than that. If I ever have a baby girl, I hope she finds someone who treats her with respect and doesn’t end up with a guy who mistreats her or controls her. I would have some very choice words for that young man and he wouldn’t want to see me angry.

I wrote the song for all the young guys that might be stuck in that mindset and need a wake-up call. I love when fathers or young guys come up to me and say “Man, the baby girl song really got to me”, that’s one of the best compliments I can receive.

I just heard a new song from Lindsay Ell called “Make You” and it blew me away. I think she is a great person, but I felt she never touched on big issues in her songs until now. She’s speaking up about her past and I applaud her for it. It’s not easy to open up about your struggles, but I feel it’s so important and can ultimately help someone that is going through the same things that you went through at some point in your life.