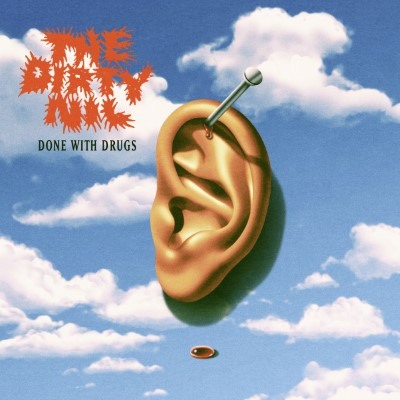 Hamilton, Ontario trio The Dirty Nil announce the release of a music video for their single “Done With Drugs”.

During this time, when most of the world is in isolation mode, The Dirty Nil have one advantage – “the fact that singer/guitarist Luke Bentham, bassist Ross Miller, and drummer Kyle Fisher all live together in the same house.” As a result, the band has been able to work on releasing new materials (and videos such as this), along with putting the finishing touches on their next album “without having to worry about social distancing, face masks, or their 40-minute Zoom time limit running out.” This makes their work a whole lot easier at the moment.

Their single, “Done With Drugs”, includes lyrics about quitting drugs. According to the band, this is something that shouldn’t be taken at face value. According to Bentham he sees posts on Facebook about various people trying to stop doing something that may negatively affect their lives (drugs, drinking, eating an abundance of fast food, etc).

Bentham says, “On Facebook, I see these posts from people declaring, “I’m done with this!” — they’ll have a six-paragraph post about how they’re changing their lives. I’m definitely not against self-betterment, and I’m not trying to make light of anyone’s struggle; I’m just kind of amused and fascinated by that whole aspect of social media. Like someone will post, “I’m done drinking coffee!” Okay, well then just stop drinking coffee — you don’t have to try to stop the internet for the day to tell everybody that you’re done with Maxwell House! I find that funny, and somewhat narcissistic. But that’s just my opinion, and I’m kind of an asshole!”

While reflecting on the making of the video for “Done With Drugs”, Bentham states,

“I don’t think I’ve ever laughed harder on the set of a video. From Kyle’s karate moves, to the drone camera crashing through the warehouse and nearly killing us, this video captures the mayhem and spirit of our band in a special way.”

This is definitely one to check out! You won’t be disappointed.