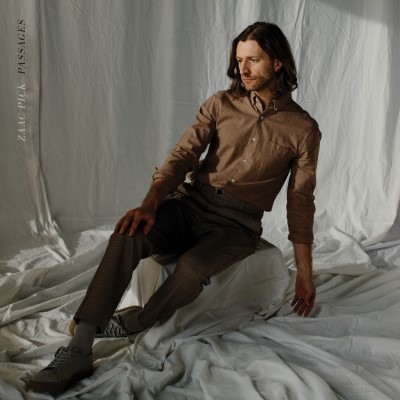 There sure is a lot of great folk music coming from Vancouver these days, and you can count Zaac Pick among the artists contributing to that. Passages, out just the first week this summer, is his second studio album.

Among the release’s standout tracks is “Ladder to the Sun,” comparatively animated in the context of the others with its upbeat rhythm and especially catchy vocals. Much of the rest of the release is fairly mellow in pace and manner, though that song’s spirit is somewhat replicated in places. The initially lowkey “Play Pause Rewind,” for instance, picks up a whole lot of energy toward its end. But most of the songs are more typified by slow-to-medium tempos, easygoing acoustic guitar, and clean vocals occasionally a bit in style like the solo work of Tim Baker (e.g. “Small Wonders”), and supplemented by such peacefully formed adornments as piano or violin.

Zaac Pick’s soft-spoken way as an artist surely doesn’t negate the weight of what he sings about, however. As one example, the lyrics of “Strong Enough” deal poignantly with the constraints of gender expectations regularly pushed upon people (i.e. “Fathers and sons, don’t learn how to cry” / “Mothers and daughters, learn not to speak up”). During other songs, he intones of love, loss, regret, growth, and additional universal human occurrences. On Passages, Zaac Pick is relatable, demonstrating strength not just as a performer, but as a songwriter adept at conveying the feelings and experiences that we all share in common.