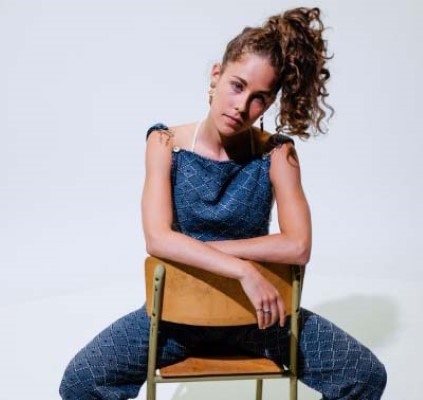 Slinger is described as an old-soul with velvet-like harmonies, with years of performing already under her belt. From musical theatre to piano, dancing, and vocal lessons, she became a force to be reckoned with from an early age. In 2019 she released her first professional single “Flux” — produced by award-winner Nygel Asselin from Greenhouse Studios.

Her debut album is in the works at 604 Records, working with acclaimed producers and industry veterans, Louise Burns and Kevvy. We caught up with the budding singer-songwriter to find out more about her influences, her new music, and where she’s going next.

Take us back for a moment to your musical tastes growing up. Did you immerse yourself in any particular artists or genres? And did they influence your current sound?

I think, like many, my early artistic tastes were a product of the CDs (and subsequent iPod Shuffle playlists) my parents played in the car. There were lots of big 80s music—think U2, Prince, George Michael, Tears For Fears. My mom would also play one of Jann Arden’s live concert CDs often. That was probably formative for me in the way I consider live banter, conversation and humour to be integral to a great show. I was also a musical theatre kid, so theatre songs with lots of harmony laid a foundation, too.

When I got old enough to start curating my own playlists, I listened to a ton of Top 40 pop and country. Taylor Swift and John Mayer were perpetual soundtracks (my head almost exploded when they dated for a short while). But I also had a real love for what I labelled “chillz” music on my iTunes, which was a long list of singer-songwriters types and indie artists like Regina Spektor, The Fray, Sara Bareilles, Zee Avi, Imogen Heap, Corinne Bailey Rae, and Norah Jones.

In all honesty, I get intimidated when asked about genre because I don’t feel like I know how to properly classify people and I think music and music history nerds will come for me. Also, talking about formative genres growing up makes it sound like there was this intentional crafting and music education I did from a very young age. In fact, I just listened to the Shrek soundtrack and Shania Twain and Hilary Duff over and over because those were the CD’s that were in the car. Everything was a happenstance infusion into my musical consciousness—it wasn’t intentional.

How did your past experiences in musical theatre shape how you connect with audiences on stage?

So much. I had literally no fear as a child on stage. It was where I felt authentic and like my most present self. I was drawn to comedic roles growing up—I loved making people laugh. I feel grateful for all the performance experience I got before I hit puberty because adolescence does strange things to your psyche. I became a lot more self-conscious and nervous about performing once I realized that not every single person in the world was going to like what I did. Also—and no one talks about this!— I had a really hard time when my voice changed as a teenage girl. I was used to these big, belting, impressive theatre roles, and suddenly I couldn’t do that in the way I wanted. But I knew that I still loved connecting with people on stage. Songwriting and original performance became a way for me to claim a new spotlight that met me where I was at.

You’ve now signed with 604 Records — congratulations, by the way! Why was this the right partnership for you and where you’re at in your career?

Thank you! It’s been an exciting process. In full transparency, I agonized over whether this was, in fact, the right partnership for me. It felt early in my career, and I hadn’t been “shopping myself around” to a variety of labels as many people suggested. I sought out so much advice, and I got so many conflicting ideas. It was kind of brutal, actually.

It took a mentor from Canada’s Music Incubator to help me get clarity on this incredible opportunity, and to stop using other people’s trajectories as benchmarks for my own. I’d been so fortunate to be mentored and supported by Louise Burns and Kevvy, two artists and producers with the label. They’d gone to bat for me from the day I met them, and we were already creating amazing music together. Jonathan Simkin, the head of 604 Records, answered every single one of my dozens of questions meticulously and patiently over email and on the phone. It’s like that story about the drowning man who asks for God to save him—a boat, a helicopter, and the Coast Guard come by to offer help, but he keeps saying he’s waiting for god. Then he drowns, and sees god in the afterlife, and asks angrily: “Why didn’t you save me?!” And God says: “I sent you a boat, a helicopter, and the Coast Guard!” I realized that this was actually the perfect opportunity for me.

Louise and Kevvy have improved my writing and completely expanded what’s possible for me and my songs. The studio is a 15-minute bike ride from my house. Friends and family can drop by to do session music or background vocals. There’s a wonderful in-house team to support with photography and video ideas, and there are comedy shows, and so many interesting people coming in and out of the building.

It’s interesting reading about the early experimentation from your new single Tarot — what was that process like? And what did it feel like when the song began to take shape and become what it is now?

I think that this was the first song that me, Louise, and Kevvy worked on collaboratively. I had recorded an unfinished demo on Garageband and sent it to them along with a slew of other ideas. They both really liked Tarot, and Kevvy started programming on it. I was actually in Toronto once he sent through the new version, so I learned how to start doing music and production notes over email (I rely a lot on voice notes where I grunt out a percussion idea—very cute). The three of us worked through several iterations until it felt right. Once I was home, I recorded some new vocals and that was it.

There are elements from the original demo in the final version, like the “mm, mmhmm” sound you hear. That’s my initial take on my USB mic. The original was slower and sparser—piano was basically the only instrumentation. But all of the additional percussion, the electric guitar strums, Kevvy’s unique touches (like glitchy strings and the video game sounding hook) made it sound so much better and fully realized.

When it came time to shoot the video, were their conversations around the aesthetics? Or did your director, Miranda MacDougall, come to you with a fully formed vision?

I leak all of my unreleased music to Miranda because she’s one of my closest friends and also because I want her creative vision on everything. Her and Callum Gunn were quarantined on Saltspring Island and we had a preliminary Zoom meeting. I had a different idea, initially, and theirs was so much more interesting. I think I find it hard to veer away from my core influences and aesthetic preferences, many of which were explored in the music video for Flux. So, yes, their vision was fully formed alongside Harry Hill, and they sent me an incredible storyboard with stills of all these shots they wanted to capture. I had no useful feedback because I loved it on the spot. It was already realized.

We’d love to know more about your forthcoming full-length release. What can you tell us about the moods and the stories surrounding the songs that will be featured?

I’m so excited to share every song on the album. I didn’t realize how impatient I was until I signed with 604.

I write a lot about relationships between people: my own romantic, monogamous relationship is a big one, as well as family, friendships, and even relationships that I simply observe as an outsider. I am always trying to decode what’s happening and to figure out my place in the mess of life. I’m 24 now, and I’ve found on this record that I channel nostalgia about the loss of childhood as well as fear of the compressing pressure of adulthood that lies ahead.

Where do you hope to go next with your career? Are there particular goals you’ve set for yourself?

I have many secret goals and aspirations and visions for myself that feel so huge and scary that I can barely admit them to myself in my journal. But my immediate next focus is to continue building relationships with people who like listening to my music as I get ready to release more singles and my full album. I was planning on this year and next year being a time of endless networking, performing, and collaborating. I was going to go down to LA and maybe plan another trip to Toronto and was going to play my first music festival this summer. I guess it’s good for a Type A person like me to be thrown massive, unpredictable curveballs sometimes. More than anything, I want people to feel the possibility and expansiveness of my music.