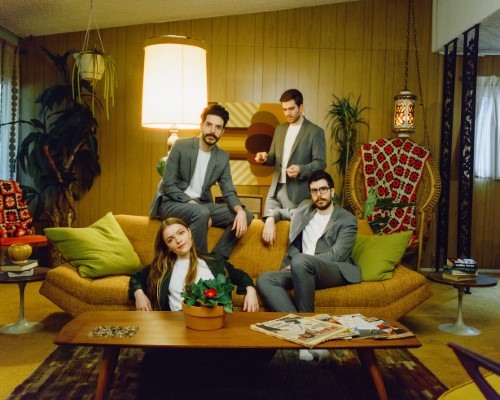 The Oshawa, Ontario based band Dizzy recently shared their latest single and music video for “Roman Candles”. This track will appear on the band’s sophomore album, The Sun and Her Scorch, set to be released on July 31 via Royal Mountain Records.

Formed in 2015, Dizzy’s origins lie in the longtime friendship between Katie Munshaw and the band’s drummer Charlie Spencer. The duo originally met in ninth grade and later sang together in choir. “Upon graduating high school, the two decided to sidestep the university path and start a band, enlisting Charlie’s siblings Mackenzie (bass) and Alex (guitar) and getting their start gigging in local bars. After playing one of their very first shows in Toronto, Dizzy landed a deal with Royal Mountain Records.” The rest, as they say, is history.

“‘Roman Candles’ is about how insecure I feel being someone who’s pursued music as a job. I’ve often felt jealous of friends who’ve taken more traditional paths in life. Some have gone to university and have 9-to-5 jobs already and have to buy funny things like lawnmowers and cutlery. I know that sounds silly, but I have a real fear I’ll never own a home or be able to support a family because of the decision I’ve made, so of course that’s scary. I think I’ve quit the band a dozen times since we started and then wind up taking it back an hour later because I know it’s just fear talking.”

With the tracks “Sunflower” and “The Magician” already being released as singles, Dizzy’s newest album, The Sun and Her Scorch,  is already receiving praise. “The band took an entirely self-directed approach to every aspect of the album’s creation, introducing a more kinetic energy into their sound through their lavish use of live instrumentation. Tapping into their increased sense of closeness and confidence, the band brings its truth-telling to confessions of insecurity, resentment and fear of failure.” This allowed the experience to be “totally challenging and completely rewarding.”