Five Questions With Sound of Kalima 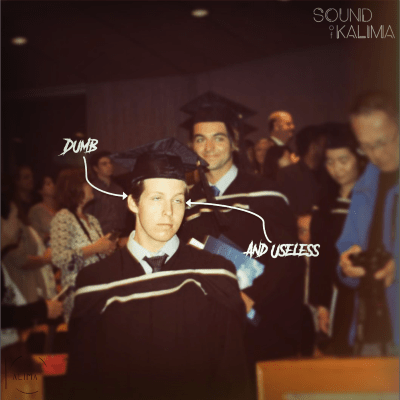 Vancouver, BC-based band, Sound of Kalima has no respect for the limitations of genre, they bridge the gap between electronic, hip-hop, soul, and dance music.

Recently, the band has unveiled “Dumb & Useless”, which is written from the perspective of an everyday person walking down the street and bearing witness to the consequences of political instability and incompetence right in their own backyard. Poverty, drug abuse, and an education system designed for student failure are issues we bring to the conversation in this modern punk soundtrack for the everyday normal person.

Check out the single below, and find out more about Sound of Kalima via our Five Questions With segment.

P: Hi, I’m Pete. One half of Sound of Kalima, a production duo from Vancouver.

S: Hi, I’m Sal. The other half of Sound of Kalima. Two halves make us.

S: Essentially, we’re the modern-day Clash. Our writing style is kinda punky, very fun, and pretty energetic. Loads of bursts of energy and the music is intensely passionate. At the moment, we like to incorporate modern hip hop and pop sensibilities with a harder guitar-based style.

P: Okay okay. I’m with that. I’d say our writing styles are often very collaborative.  One of us usually starts with an idea, and then the other comes through and adds to it, and then triggers a new idea/direction for the other, and so on and so forth.  We’ll go back and forth like that until we’ve got a song.

P: With COVID in the air, we don’t have any shows planned at the moment.  We’re exploring ways to bring our live show to the internet, or perhaps even an open-air show.  Either way, the best way to stay up to date is by following our socials (@soundofkalima).

S: What Pete said. I would say our live performances are quite energetic and full of smiles. We like to laugh and have a good time to ensure the audience is having a good time too. It’s meant to be a very communal experience and, hopefully, we can provide an outlet and say some things people haven’t been able to voice but think about all the time.

S: Considering we trashed all of our old songs when we released our last song called Wild Trash and now we have Dumb & Useless out. I would say listen to Dumb & Useless because it’s one of the most energetic, angry and nihilistic tracks we have ever done. We hope people feel the same sentiments that gave us the passion to write the track.

P: Yeah, since Dumb & Useless literally just dropped that’s got to be the one to check out. It’s the most accurate reflection of how we’re currently feeling, and if you want to know us know our music.

P: There are many Canadian artists I absolutely adore and we are so lucky to call some of them friends.  Bella St. Clair, ekke, Chris Clute, Andrea Clute, Pavy, Hoodie Browns, Carley Belfry, Jamie-Rose, & Dora Kola are all collaborators that became friends and eventually family.  All of them are worth checking out.

S: I am into Curtis Waters right now, his music is dope and it’s pretty fresh. I was also listening to Joni Mitchell a lot recently too. She’s an all-time great for music in general, not restricted to Canada. Overall, Canada’s got some really great talent both old and young.

Share this:
Related ItemsBC MusicDumb & UselessInterviewSound of KalimaVancouver BC
← Previous Story PREMIERE – Joe McLeod releases video for “Those Who Can Wait”
Next Story → Five Questions With fanclubwallet