Five Questions With The Long War 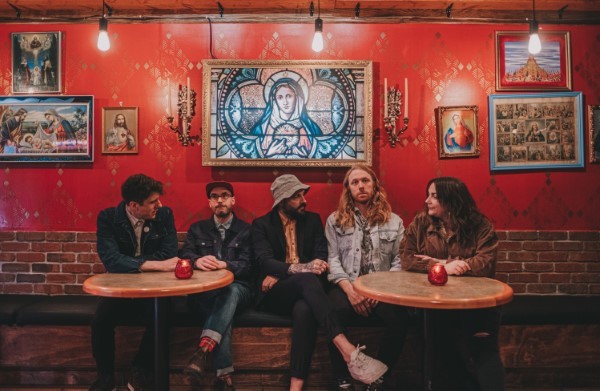 Vancouver, BC-based indie-rock band, The Long War, who you may know as the winners of the 2017 CBC Searchlight Competition have released their new single, “Endless Summer”.

“Endless Summer” was written in the summer of 2018. The track feels like a cathartic break up anthem. It is about the pain of losing someone and dealing with that loss while being stuck in a summer that felt like it would never end. There was a heatwave and Vancouver felt crazier than usual. “Endless Summer” was recorded in 2019 at Protection Island Studios in Maple Ridge, BC. It was produced, mixed, and engineered by Jonathan Anderson and mastered by Harris Newman at Greymarket Mastering.

Check out the single below and find out more about The Long War via our Five Questions With segment.

The Long War is a five-piece rock band out of Vancouver, BC. We’ve been together since 2016. A few years back we won CBC Searchlight, which was really our intro into the music industry. Since then we’ve released the album Landscapes and will soon be dropping our sophomore record Under a Heavy Sky. Look out for our first single, Endless Summer. Available wherever you get your music.

The songs are autobiographical tales. They reflect the landscapes that have inspired me and the people who have come and gone throughout my life. I see the world as a collage of moving pictures so I try to produce songs that capture the cinematic essence of life. Building out from this foundation of storytelling, the band takes things sonically to the next level, providing support in beautiful accompanying vocal arrangements, hooks, and melodies. Our music for me is cathartic, deeply personal, and speaks to those who have loved and lost. But I’ve always supported the philosophy that once a song is out in the world it no longer belongs to me. A song can take on a new life and meaning depending on how it impacts a listener.

Obviously COVID-19 has been a historically altering event. We’ve all had to make adjustments. We’ve been exploring unique ways of live streaming our music with the help of a local production company called Galaxy House. The idea is to get the highest quality audio and video possible. We want to interact with our fans but also give them a really special, memorable experience. We’re going live July 3rd in partnership with Nickel Brook Brewing who are based out of Ontario. We try to perform with honesty and like our shows to emotionally driven. I love playing in theatre venues, to listening audiences. I think we can be a bit quirky at times, there’s a lot of personality on that stage!

I’d ask them to listen to Endless Summer. It is our new single and I’m at risk of over-promoting it. However, I honestly feel that this track not only feels right for the times but it showcases our sound and our growth sonically as a band. It’s all-encompassing and I’m really proud of it and the music we’re about to release.

Joel Plaskett recently released 44 and it’s an incredibly, ambitious record that I love. I’m a fan of Dan Mangan who is sort of a Vancouver legend and someone who does so much for the music community. Alvvays is great, The Barr Brothers, Leif Vollebekk, Fast Romantics, Tim Baker, Timber Timbre, Matt Mays. Shout out to our pals Winter Youth and Zach and Zach Kleisinger both of which are making some great music.