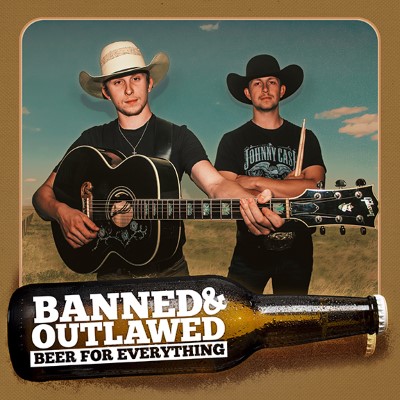 Canadian country duo, Banned & Outlawed are made up of brothers, Jon and Dan Hnatishin. The two have unveiled their latest track, “Beer For Everything”, which they say is far more than a mindless, beer-slingin’ song,

“This one tugs a bit on your heartstrings while leaving plenty of room for a good time,” Jon says. “It’s about growing up and learning lessons.”

It stands right beside you while you crack a cold one after a hard day’s work,” Dan adds. “Heck, this song’s been with you since you stole that first drink from your parent’s basement fridge.

Recorded and produced with Golden Oak Record Co’s Greg Arcade and Nathan Kehler, the track proved an interesting experience for the band and production team due to an unexpected location change mid-way.

“During the tracking, Greg had an opportunity to move into a new studio space, which resulted in everyone having to come with him,” the brothers recall. “At the end of the day, the new creative space allowed for a heightening of creative quality, and the final production feels very organic and smooth.”

Check out “Beer for Everything” below and find out more about Dan & Jon via our Five Questions With segment.

We are an up and coming country music band called Banned & Outlawed consisting of myself Daniel Hnatishin and my older brother Jon Hnatishin. We started this band at a very young age back in elementary school with our mom as our music teacher for 4 years. It just progressively got bigger and more serious from there.

We like to compare our writing style and also production style to Mr. Eric Church and Riley Green. We like to write about our own life experiences as they come and relate them to songs that we hear from other artists. It’s those special moments in life where we can relate to a certain song that creates our own style of songwriting. We sometimes also like to have some fun and put a twist on our song. Being ages of 22 and 20 we sure have lots of parties on the weekends with our buddies when we are not working. This becomes a big part of our songwriting. But mostly we like to write about our own small town country living which we live every day and what we grew up on. Any of the songs that we write are about the truth and our own life experiences.

This summer we don’t have much for upcoming shows because of these tough covid19 times that everyone is in but we have a couple private parties towards the end of summer around our hometown of Hazelridge, Manitoba, which we are blessed to have because almost every show was cancelled for us this year but we are grateful to have the opportunity to play these few shows.

For someone who has not yet seen us live, I would like to say our show is very alive and energetic. We like to portray a very outlaw kind of party vibe at each show that we play at. We like to bring our small town party in the parking lot vibe to the big stage. Lots of people like to refer to our show as “loud” and yes we do have trouble sometimes keeping it low key and calm once we start to turn it up, but we have never had a crowd that didn’t enjoy our show or our music.

If I were to suggest one of our songs for someone to hear it would our first song released “Write a Song.” I really like this song because it talks about how we have grown up in our small town and how our friends are really important to us and just how we rolled while going through high school. Also with this song, we really hit it right on the money because we did everything we could to make it sound good and the way we wanted it to be. It almost seemed like everything fell into the right place through the makings of it. It’s amazing what a few guys can create when they put a lot of work and time and artistry into something especially with it being our first song released to radio. That’s what I love most about this song. To me, this song will never get old. It lets everyone know who we are and that we have bigger and better things to come.

Some of our current favorite Canadian bands or artists that we listen to and look up to are Gordon Lightfoot. We like him mostly because when we were younger this is all my dad would listen too playing in the cassette player of his old Dodge pickup. We grew up on his music and his songwriting. We also really enjoy him because we like the production he puts into his music with all the different instruments and the way everything is put together. To us, he is a true Canadian icon. A Canadian group we idolize is Bachman Turner Overdrive. Before we started playing country music we did what probably any other band did, we wanted to be rock stars, so we played rock music. But we played songs like “Takin Care Of Business” and “You Ain’t Seen Nothin’ Yet.” That’s who we wanted to be like and still do but in a different way. These songs taught us how to play and put on a show for the crowd because these songs really kicked. Bachman Turner Overdrive had a huge influence on us and still continues to do. Without these guys and their songs we wouldn’t be who we are today. Coming to the countryside of things, we really dig Emerson Drive and always have. We like these guys for their songwriting, the production and size of band that they have. To us, it seems like they kind of carved their own path and did things their own way and that’s what we like most about them. One day we hope to be as popular and maybe do some collaborating with them as we move up through this Canadian country music world.