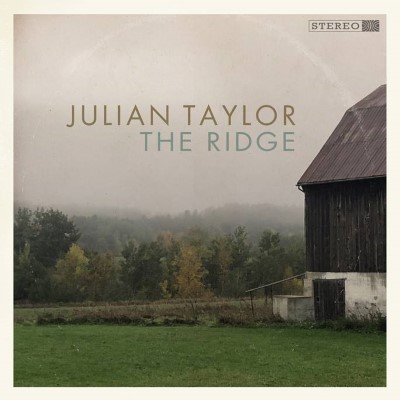 The Ridge is the newest album from Toronto based artist, Julian Taylor.

The Ridge is like an antique chair: expertly built, nostalgic, dependable and comforting,  — a reliable entry into the genre of Americana (Or as Taylor calls it “Premium Vintage”). Each composition has the precision and expertise of artists that couldn’t waste a word or a note if they tried; hands worn from the muscle memory of making music together for over a decade. Altogether, the eight-track album features Julian Taylor’s vocals with female backing vocals, guitar, piano, drums, conga, bass, dobro guitar, pedal steel, fiddle, and cello. At the forefront of each track, Taylor’s voice is a soft and endearing presence — even tracks with less than happy themes radiate with Taylor’s love for his audience, his accompaniment, and the world in general. The Ridge was actually due to release in late June, but Taylor says he “decided to release the album sooner in the hope that his songs might bring joy to listeners in troubled times;” a fitting sentiment it is hard to not feel The Ridge is a love letter to us all.

Standout tracks on The Ridge for me were its title track (The Ridge) and Ola Let’s Dance. According to Taylor’s press, The Ridge’s title track was based on a true story that “chronicles a young boy’s life on a farm before they had to sell it and move on.” This track has the rhythm of a boxcar, bouncing steadily, yet jauntily while the lyrics express the accompanying pain of loss, but the promise of new possibilities. I particularly liked that the lyrics are not shy to express how hard farm life was, but that it had its own joys and was, at least, familiar.

The final song on the album, “Ola, Let’s Dance” starts with Taylor reciting a poem “written by his grandfather about the natural way of things and our place in the universe” backed with a playful, almost cheeky, accompaniment. After the poem ends, Taylor notes in his press that he plays the part of his grandfather inviting his grandmother, “Ola” to dance. Even without this background, the joy in this track is infectious. Taylor’s grandfather might be inviting Ola, but Taylor is just as much encouraging us to do the same. It’s a really hard song to not smile and sway along to.