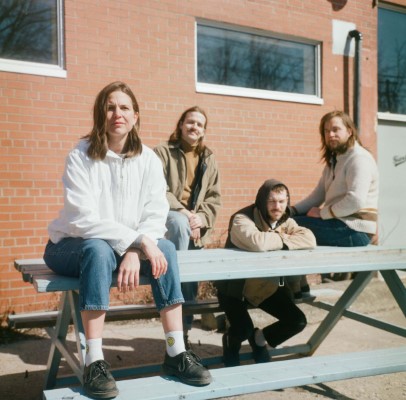 Little Kid recently released their single “Losing” which came out to announce their forthcoming album Transfiguration Highway in early May. Now the band is sharing a second single from the upcoming record entitled “All Night (Golden Ring)”.

The new song is a duet between Kenny Boothby and bandmate Megan Lunn. “All Night (Golden Ring)” explores the relationship between Tammy Wynette and George Jones on a track that is named for an album of duets (Golden Ring) from the two country singers who were also a real-life couple. Boothby was a fan of the record but found his understanding of it unavoidably altered by its context, as the album was recorded after Wynette and Jones had divorced due to Jones’ abusive behavior. The singers, after failing to find the same success as solo artists thereafter, recorded the album together for purely commercial reasons and it went on to become the first number 1 record of their career.

“I was really saddened to read about that, and to picture how that must have felt for Tammy” says Boothby. “I can’t relate directly, but as a survivor of abuse, I can only imagine what it would feel like to have to sing with my abuser, much less to have to sing love songs with him and act like everything is OK.”

In a shifting world, Boothby finds himself inspired by this idea of transfiguration – a complete change of form or appearance into a more beautiful or spiritual state. The band’s forthcoming album, Transfiguration Highway, is a thoughtful reflection on revelation and change, both spiritual and lived. Through the lens of a long-standing fascination with Christian mysticism, the album title suggests a reflection of Boothby’s own process of personal growth, the way that growth has changed his perception of the world, and how that has combined with the material change of the world around him to alter the way his past relates to his present.

“In my mind, the Transfiguration Highway is a road that runs from my hometown of Petrolia, through the small southern Ontario towns I grew up in, through to larger and larger Ontario cities, like London, until it reaches me here in Toronto. Along that path, there’s a movement from quiet to loud. From slow to fast. From God to godlessness. From unique and charming houses to mundane condos. The path then stretches on to the north and to the east to Marmora, a place I’ve never visited but one that I’ve become entranced by. I’ve come to view it as some kind of beckoning light further down the highway…”

Little Kid’s Transfiguration Highway is due out on Solitaire Recordings on July 3rd. It is available for preorder here, and fans can listen to “All Night (Golden Ring)” on YouTube.