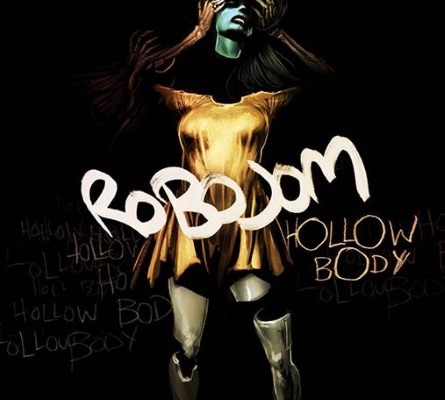 Winnipeg, MB-based six-piece cyberpunksters, Robojom released their debut LP, Hollow Body in January, and now they have unveiled a video for the single, “Monster Cookie”.

“We blend it up into a darkwave aesthetic with robot and cyborg themes and characters,” the band says. “Our sound melds the post-apocalyptic future we imagined in the 80s with steady, darkened grooves informed by Montreal and New York City’s late aught dance punk scenes.

Don’t just take our — or their — word for it; Bandcamper @BerenFranklin says “I never knew I needed Canadian sexual punk music in my life, but I really, really did.”

Check out the video for “Monster Cookie” below and find out more about Robojom via our Five Questions With segment.

Hi, we are Robojom!  We are a group of robots from space who like to have a good time, play some wild jams and put on a big show. We’ve been a thing since 2014, but have always been fluidly changing.  At our core we have always been a band that combines custom made music generating software with modern dance and performance art in a darkwave aesthetic with robot and cyborg themes and characters.

Our music and writing style is as mixed a bag as we are.  When we started back in 2014, up until early 2017, we just wrote and pre-recorded some basslines and loops with some music generation software I wrote. I played live drums along with that and Renée made up the lyrics and vocal melodies and we had live synth / keyboards on top as well.  This worked well because we could keep it a small group of just 3 people but also it was difficult to make new songs because we couldn’t really create together, we’d have to prepare the music ahead of time because it was pre-recorded.  We had only made 10 songs in about 3 or 4 years.  Then we added a bassist and guitarist and percussionist and started creating about 10 songs a week because we could get together and music would just come exploding out of us.  So for our writing style now, we just record all of those jams and sift through afterwards to pick out the keepers and develop them.  The band as it is now is kind of founded on a unique psychological safety that is fostered by all of us.  This first album, Hollow Body, is 9 of those first 10 songs.

Not for the moment, like everyone else these days. We’re a 6 piece band that puts on pretty big production shows.  I mean, big for a Canadian bar band.  Costumes, props, choreography, dancers, visuals; we are trying to blow people away with our live show.  We’re not the 3 chords and the truth Candiana aesthetic (not that there’s anything wrong with that).  We often have people come up to us after a live show and say it was unlike anything they’ve ever seen.  People tell us they felt like they were at an arena show, but in a small bar.

Another difficult question to answer, that would depend on who is asking.  If I was to suggest a song to someone I didn’t know probably Monster Cookie, because it’s our “fun” song.  Some of the material on the album is quite dark, lyrically and musically, and the performances can be emotional and sometimes frightening or jarring.  Monster Cookie is the one that reaffirms we are also having fun, and it’s not just constant cathartic expression.  Flash and Take Off Your Face also fall into that category too.  Some of the other songs, like Fear and Hollow Body are the songs for the ones who aren’t afraid of the darker feelings.

Now this is a question I could answer for days.  If you like Robojom, check out Duchess Says, We Are Wolves, Holy Fuck.  Those are the bigger names from Montreal and Toronto who are or were doing something musically in the same vein as what we are doing.  Just looking at Winnipeg’s music scene alone, it is a pretty phenomenal place, and there are so many great bands here: CoaS, tunic, Slow Spirit, Holy Void, Great Wealth, Juniper Bush, Human Music, Viva Non, French Class, Ghost Twin, housepanther, Hut Hut, Conduct, REALiTY GROUP, Crabskull, A Raven Called Crow, JayWood, Softswitch, the emu and literally a billion more that I am forgetting about right now… while deliberately not naming other bands I play in or have played in… Winnipeg is like that, everyone plays in everyone’s bands.  When I was on tour last spring with Merin we played a show in Calgary with a band called Slut Prophet.  That was one of the best live bands I had seen in a long time.