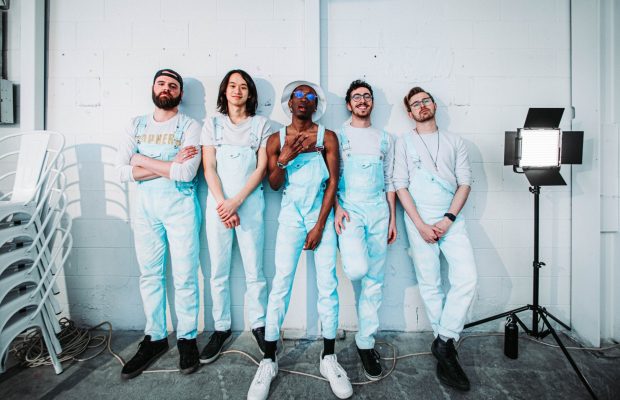 The video was directed and shot by Teaghan McGinnis, a successful photographer, and videographer who has toured the world with various artists on indie and major labels. It’s a vintage throwback, with a distinct visual style that pays homage to some of our favourite directors.

“We funded the video shoot with a successful (and our first and only) Kickstarter campaign (thanks to our fan base and community support) and the single was produced by award-winning producer Andrew Judah.”

Check out the video below and find out more about Post-Modern Connection via our Five Questions With segment.

Hey, we’re Post-Modern Connection or PMC for short! We’re from Kelowna BC. We’ve got 5 members Tega, Georges, Steven, Mitch, and Cam! We all met here. Tega Georges and Steve all met at UBCO and Mitch, and Cam joined us later. We’ve been a band for about 3 years now and it’s been quite amazing, to be honest, we’ve grown a lot and change our sound a lot we’re nearing our final form haha. Tega, Steven and Georges all grow up in different countries and moved to Canada for school. We’re inspired by a lot of different sounds and artists, but I think the sounds that primarily stand out in our music are jazz, neo-soul, old school lounge rock and modern indie pop. So artists like Leon Bridges, Summer Salt, Alabama Shakes, Gus Dapperton, BlahBlahBlah, King Krule it’s a whole mess of things!

Our music is based on the understanding that modern-day “Indie” has roots in jazz and jazz chords, so we play with those chords and combine them with modern sounds like synths and other things. Tega our lead singer, has very strong soul influences to his voice. That comes from growing up in the church in Nigeria and being part of multiple choirs. Mitch, who just joined us, plays classic violin which adds a unique aspect to our music, not something you expect from an indie band.

Our writing style is simple. Tega and Georges primarily write the music. They bounce ideas back and forth on leads and song structure. Tega writes the lyrics for the most part. He writes with the idea to tell our story and feelings. Personal Tega’s not super expressive with certain things, so making music is how he gets it all out. He also writes in hopes that people relate to and hopefully feel like someone else understands them. I guess in the end he’s just wanting to be understood himself.

Mitch also contributes to song structure and chord structure and leads. Sometimes one of us creates an idea and as we play it as a band it evolves into something that represents everyone’s influences. For instance, Steven listens to a lot of Pysch, Math Rock, and J-Rock. So, his baselines tend to reflect that.

Currently, we’ve got nothing booked due to COVID, but we are planning a show for July 11th, so we’ll see how that goes. You’ll have to check our Instagram for more on that.

We think our live performance is very high energy. More high energy than people expects hahaha, cause we’re so melancholic. But once we get into it, we get lost in it and it’s nice. We probably have the most active and energetic bassist you’ve seen. We also try to make shows special, whether that’s through stage design, props, or crowd engagement, etc. We just want everyone to have a nice memory of the event even if they don’t remember what played haha

That’s tough. All our songs sound fairly different from each other. We would suggest “Little Things or “Memories” or “Drowning”.

Here are a few of our favs: