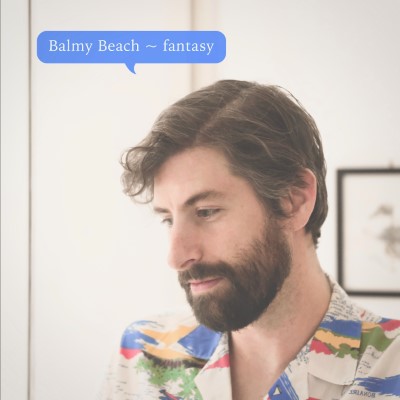 Following his debut EP under this alias in 2018, Landen created the video for “Fantasy” in collaboration with rising power-pop provocateur Miss World. Its Zoom-style split-screen dance party may look fun, but the song has a sad undercurrent. Tracing the difficult experiences of a dying relationship through idealized visions of a new life alone, it provides a relatable glimpse into the fraught thoughts many people are sharing in a post-pandemic world.

The single was written, recorded, and completed in five days at the end of March 2020, shortly before quarantine kicked in fully.

Landen’s melancholy vocals are propelled by frenetic high hats and a catchy, New Order-inspired bass line. Its sophisticated sheen can be credited to mixer Michael Abercrombie, and mastering engineer Gavin Gardiner, owner of Toronto’s All Day Coconut Studio. As Landen explains, the song’s spontaneous creation was partly inspired by the slower pace of his better-known indie-pop band, Jiants.

“I’m kind of an obsessive-compulsive song writer and probably write three times as many songs as I put out,” Landen laughs. “Balmy Beach has become an outlet for some of my more ‘pop’ Ideas. I think it’s a backlash of creative energy that seems to build up during the process/frustrations of a live band. With Jiants, it takes months to get things together to record, and with Balmy Beach it’s usually days. It’s nice to have both projects!”

Check out the video below and find out more about Jesse via our Five Questions With segment.

Balmy Beach is definitely a bedroom recording project. It’s like an indie /pop/electro kind of vibe.

If I had to describe the writing style I’d just say all these songs get started on the bass!

So far only my band, Jiants has been playing live gigs. 2020 was supposed to be the year of the first Balmy Beach live show but now I’m not so certain it’s gonna happen.

I can only imagine the live performance being mind-blowing if it’s ever allowed to take place lol.