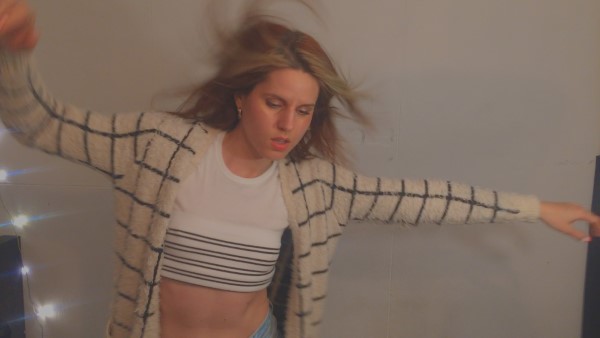 Toronto, ON-based Cherry Blaster has unveiled a brand new single, “Body Language” along with a video to accompany the release.

Cherry Blaster was setting up to release their first single as a full band with a music video to accompany it, but COVID-19 interrupted the process before the video could be shot. Somewhat restlessly, front-woman Iulia Ciobanu switched gears and created a new song and video – writing, producing, recording, and filming it (on her iPhone 6!) alone in her garage. With a blend of sensuality and unselfconscious humour, the video matches the song’s tone and reveals a fun little surprise that plays on the song title, smirkingly underscoring the barrier to physical communication that distance creates.

Check out the video for “Body Language” below and find out more about the musician via our Five Questions With segment.

Hi! I’m Iulia Ciobanu and I front a band called Cherry Blaster in Toronto. Cherry Blaster was my solo electronic project for a couple of years, but from 2017-2018 my writing began to return to an indie rock style (as was my focus a few years earlier with my project Khorol), and so I formed a band with Tasker Hull (drums), Martha Ramsay (synth), and Scott Given (bass).

Cherry Blaster is currently enjoying making music in the vein of Mitski, Snail Mail, Land of Talk, etc. Pretty much every song I write is self-therapy, so I hope that our music ends up being some kind of emotional catharsis for our listeners as well. Being constantly inspired and influenced by a huge variety of music, our sound is bound to change in the coming years, which I think is a fairly common experience for musicians – there’s only so much you can do in one style and changing things up keeps it fun and challenging. This latest release, Body Language, already doesn’t quite fit into the above comparisons I made because it is much newer than the body of work we’ve been building over the last couple of years that is yet to be released.

Because of the pandemic, we have no upcoming shows right now but our live performance is usually a pretty energetic one! We play a lot faster live haha and Tasker really keeps our energy up. Right now we’re focusing on developing our demos and putting out music online.

Body Language! Making the music video in my garage was super fun and somewhat maddening, and I’m really happy with the end result. It’s the first song maybe ever that I’ve released only a couple months after I initially wrote it, so I’m still really excited about it. I wish I could release music this way all the time. It’s also the first official single since Cherry Blaster’s synthpop days.

There’s such a huge number of talented musicians even just in Toronto so it’s hard to answer this question, but here are a few: PAX, Commuted (unbelievable live show), Eliza Niemi, Poor You, Sages, Bonnie Trash, Nigel Nigel, Winona Forever, and shoutout to my other band Nutrients.