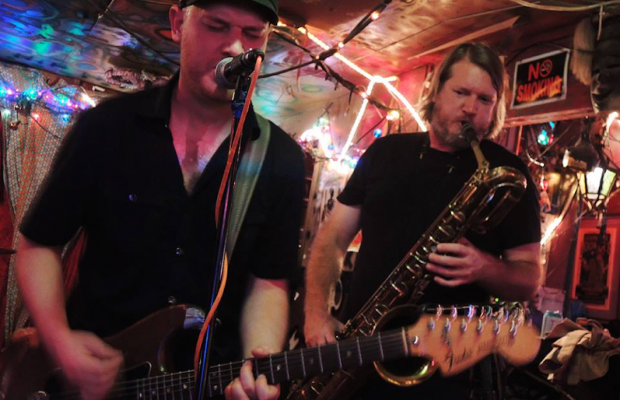 “The song reflects the better times you had with somebody you possibly shouldn’t miss,” Clifford details of the new track. “Maybe it didn’t turn out right, and maybe it was bad for you, even, but you went in eyes open and willing to accept the risk.

It’s about throwing caution to the wind and trading your better angels for the experience.”

The single is the first to land ahead of Bryce Clifford & Brother Superior’s third album release, Rebounder, set for Summer 2020.

“The story behind this album is a difficult one to talk about,” Clifford laments. “Not because of the hard feelings behind the breakup, but for the regrettably trite scenario…

“I seethe at the idea of being lumped in with lame ‘singer/songwriter seclusion’ stories,” he continues, half-groaning, half-laughing. “In all seriousness, though, I hope it isn’t filed under ‘pain makes art,’ but something more like ‘art as survival.’”

That said, some themes write themselves…

“The songs were written in a quick blast over the two weeks following a breakup,” he confides. “It was a classic case of a ‘cheatin’ heart’ causing me to irrationally drop everything I had going for me in Austin — a good job, a good apartment, good friends — and get out of town the following day.

Feeling as though the bottom had dropped out, I drove north to Canada with no plan except to mine the circumstances for a collection of songs.”

Check out “Second Hand Smoke” below and find out more about Bryce via our Five Questions With segment.

Hey.  I’m Bryce Clifford.  A singer-songwriter from a small town outside of London Ontario, named Ingersoll.  I started out mostly writing indie-rock and post-punk songs, and I think relics of that can still be heard in my music today.  I fronted a power-trio, Pedestrian Status.  We moved that band to Toronto for several years, and then I moved to Austin in the U.S. because I heard it was a great live-music town.  It was.  And a very song-focussed town.  My time in Austin bent my sound and a lot of twang and soul and blues sunk into me, blindly.

I really wish Austin and Nashville were flipped geographically because I’d save a lot on petro.

Today, I’m hanging my hat mostly in the ‘Hammer’ (Hamilton) and I’ve started a band here.  We got a few good gigs under our belt before COVID hit.

I believe in the old adage that it’s a good song if it can be played on an acoustic guitar and still holds up.

Stylistically, my new record is all across the board – melodic indie rock, some post-punk, some piano ballads, and even a country song, blessed by Kim Deschamps’ pedal-steel (of Blue Rodeo/Cowboy Junkies). Kim has a very distinct Canadian sound.

I guess I fall under the Americana umbrella these days, except there’s a lot of Canadian influence in my music too. Even in Austin, I was making music dissimilar to my peers and I’m proud of whatever that Canadian influence is. It’s not so much a sound as an attitude, a point of view, an outsider perspective, I guess. People have spent lifetimes trying to put their finger on what that is and can’t, ha. Art just comes out a bit more angular in Canada, and I think it’s very cool.

Writing style: I’m someone who writes a lot of lyrics and 95% ends up in the trash. But I let a first draft be whatever it is. Then I record myself late at night banging on a guitar, reading the lyrics, intuiting the chords as I read and sing. I don’t listen back until I’ve forgotten what I did and can listen with fresh ears, days, or weeks later. If something good sticks out then it will stick in my head. Or sometimes I notice that an idea resurfaces in different places. I grab those little things and treat them like they’re very important.

Great question. Are there? Ha, I really hope so. The downtime hasn’t been too bad because I was mostly in a write-and-rehearse mode right now anyhow, but if it goes much longer I’ll need to figure out the live-streaming.

I was talking over the phone to my friend Ben Ballinger in Austin and he said “a Livestream? – that’s for trout.” Ha. And Ben’s one of the best songwriters I know, who would do a great job at it, but the point is there’s just no replacing the real thing.

When we do get back at it, I’d say my show is about playing-to-the-room, so it varies depending on where we are. I like to keep enough looseness and surprises for the band so that it’s a blast for us. The band typically learns my recordings and then at showtime I like to add in extra players, or extend parts, or change the mood or tempo so that everything’s fresh and we are reacting. That kind of leaning on the edge can be felt by everybody. It’s where the push-pull in live music lives and that can’t be found on studio recordings.

I have a mid-tempo song called ‘Beautiful Is Never Alone’ that still seems to get the most comments when I play it for strangers. I wrote it in my early 20’s and it has a chorus that repeats ‘Oh my God, don’t let them know how I’m hanging on’. The whole song is just 2 chords, yet it doesn’t sound like it, even to me. It just works on every level, so I’m fascinated by how songs work – the duality of simple and complex happening at the same time.

It’s been so long since I came up with it that I can stand back and recognize that it was a lucky one to catch out of the ether. I always kind of hoped Rod Stewart would hear it and do it one day.

When I was writing my new record, I discovered Gord Downie’s ‘Introduce Yourself’ and listened to that constantly, start to finish, start to finish. I was full of adrenaline from a relationship gone sour. Because it’s Gord’s last record his voice has extra weight, and it was fuel on the fire for me. In retrospect, I think it also had something to do with missing Canada. I can’t hear any direct influence on how my record, but I simply loved ‘Introduce Yourself’ and it was exactly what I needed to hear at the time. It’s driving, and lyrically deep.

I’m excited to hear what this new Kathleen Edwards record is all about. Everything she does is great.

I also saw your feature on Jess Knights, and that new track “Leave Me For The Last Time” is slammin’, and on repeat in my house.

But I spend most of my time listening to the godfather, Leonard Cohen.