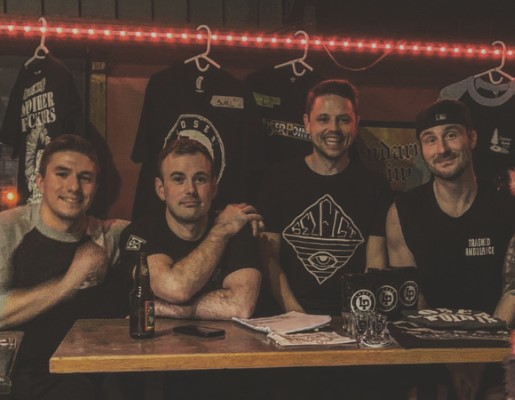 Give the EP a listen, and find out more about Loser Points via our Five Questions With segment.

Hello, and thank you for having us. I am Shawn, the singer and guitar player in Loser Points. Ozone, the drummer, and I started the band in 2015 when I moved from Yellowknife, NWT to Alberta to go to school, and Ozone moved back to Canada after living in the Middle East. A few lineup changes, 6 studio releases, and a few western Canadian tours later, we are currently based out of Edmonton, AB. We were able to complete our latest tour at the end of February, and in April released an EP Games We Play To Hide, which can be streamed here.

Loser Points has been unique in the sense that the band has grown up on record and in public. We had two records out before we even played a show, and I’m pretty sure we might have done some of the first record at the very first practice, which we went in to with zero songs and zero intent. The percolation period that most bands starting out undergo, for better or worse, did not happen with us. While I think there is a thread weaving all our work together so far, there is an extremely evident divide in the work that came before Denial & Error and everything that came afterward (all available to stream on Spotify). Before Denial & Error, our first guitar player and I individually wrote songs and would record them at our whimsy in his studio. Learning the songs prior to recording them was optional. I wrote Denial & Error, and it was very deliberate, had budgets and timelines, and that’s how it has been since then. I used to say that we are “punk rock for people who like punk rock”, but it’s been starting to turn into “punk rock for people who don’t like punk rock…and those that do.”

We, like every band in the world, have likely played our final live show of 2020. We have, to this point, allocated most of our limited budget towards recording projects, so our live show currently has no production elements; just a no-bs rock show. Loud drums, big amps, and 4 guys playing as hard as they can. That being said, we do everything in our power to have as clean a live sound as possible every time, every show. Having the music sound on point goes a long way when you don’t have access to pyro, lighting, and backdrops.

This is an especially relevant question, given the musical trajectory outlined above. Every artist stands by their newest material, and I would definitely recommend that anyone checking us out for the first time start either at the most recent entry in our discography or simply listen to the top songs on Spotify. Fans and media have not had a consensus favourite song, and it’s cool that so many of the songs are resonating with people. There are also some songs that do better live than on record and vice versa, to the point that we are re-recording one that has gone over especially well live. All that being said, Adult Girlfriends is always a good place for someone to start.

I believe it’s important to acknowledge not only emerging Canadian artists, but ones who have made a splash on the international stage, like Sum 41, Silverstein, and other big acts. Regardless of nationality, this is plain and simple a region where geography actively works against you, and it’s a significant accomplishment to rise above that. As for bands that are at more of a peer-level to us, I’d like to bring attention to Debt Cemetary (Toronto, what’s up, Davey and Fast Eddie!), Bring On The Storm (Calgary, thanks for filling in, Brandyn!), The Corps (Vancouver, thanks for filling in, Pederson!) and Me The Guts (Saskatoon, thanks for letting us crash, Derek!). For some Alberta-specific content, I curate a Spotify playlist called Alberta Punk Rock that can be found here.

Thanks again for taking the time, and be sure to follow us and stream Games We Play To Hide right here.