Home / Promos / The Pack A.D. release music video for “Give Up”

The Pack A.D. release music video for “Give Up” 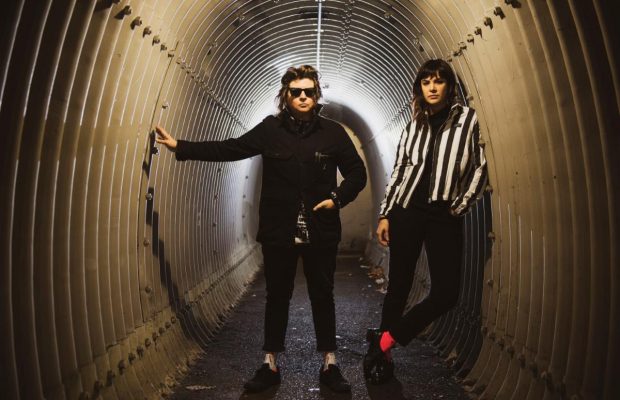 The Pack A.D. released the music video for their latest single, “Give Up”, on May 29. The duo of this psych-pop/garage-rock band, singer/guitarist Becky Black and drummer Maya Miller, released their latest album It was fun while it lasted in April.

Given the current events, the duo knew they could not celebrate the release of their latest single in the usual ways. This left the band trying to figure out the best way to share their music video with their loyal fans. Channeling their creativity and being “stuck inside, and with way too much time on their hands, the band crafted a video that not only captures the spirit of the song ‘Give Up’ but weaves it beautifully into our current situation.”  The video itself was shot with the use of drones and edited at home with the aid of their video director Matt Leaf. “The final product is a dystopian and heartbreaking visual that captures the unsettling isolation many of us now face. And while the song was crafted pre-pandemic, its sweet melancholy message has never resonated more.”

According to the band’s drummer, Maya Miller, this was not the original idea they had for the video. They had to improvise and get creative. According to Miller, the outcome of the video “is a far more engaging and frankly, gorgeous story, then it would have been. Mostly our videos run a little (read: very much) on the dark side. This is the prettiest piece of film that Matt has made for us. Incredibly sad but, damn, it’s pretty.”

“Give Up” is only one of their singles from their recent release of It was fun while it lasted in April. This release marks the bands final album (for now). The album is best described by Ivan Coyote, who wrote their album bio. Coyote writes, “All twelve songs do not waste anything. They are carefully crafted chaos, they are deliberately designed depictions of all the hope and the despair that making music for a living both brings to, and exacts from, an artist’s body, and her heart. There is fatigue in the words, and frustration too, but the drums are still relentless, and the guitar still wails and never gives up early.”

The Pack A.D. are described as having “made a sound so gigantic, so fierce and raw and empowering, that it’s easy to forget there are just two people behind this brilliant, carefully constructed havoc.” If this description does not cause an interest in hearing more, I don’t know what will.