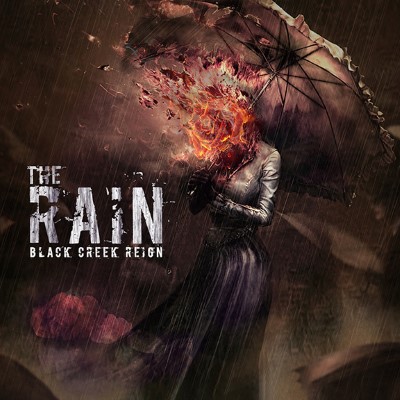 Pulling inspiration from the likes of Santana, Hendrix, and Chicago, the band is bringing us back to the glory days of guitar-centric bar rock with their own blend of rock mixed with funk and even a dash of jazz.

“We captured ‘The Rain’ on purely analogue equipment,” the band says of the track. “The melodic idea was conceived almost instantly while rehearsing in a studio downtown Toronto… We wanted to blend both old and new sounds.

Lyrically, though, we took our time,” they add. “We wanted the song to have a deeper resonance that’s more personal to us.

That said, we also tried to follow in the footsteps of legendary songwriters like The Beatles and the Eagles and leave the meaning of the song open to the interpretation of the audience.

Like, is it a cathartic call to a past lover? A fractured relationship being dealt a final nail in the coffin? Is it about the weather?

The choice can absolutely be up to the listener.”

Check out the brand new single below, and find out more about Black Creek Reign via our Five Questions With.

We’re Black Creek Reign! Comprised of Darren Armoogam, Lex Stultz, and Jake Birman, we’re a funk-rock band with a dash of reggae and pop. We’re a band for those who appreciate live instruments and mature songwriting, so if you’re a fan of those things, do check us out! We’ve been on the Toronto circuit for a few years now, and couldn’t be happier to be promoting our newest single “The Rain” with Canadian Beats today!

From day one, we’ve tried to emphasize the music first. We believe that’s the foundation for any successful project to really make a name for itself. Matching outfits and pyrotechnics will only get you so far in an ever-changing industry. But one thing that hasn’t changed, is the way a good song can resonate with an audience. We’ll start by crafting the song a few times until we feel it’s ready to rehearse, then jam over the idea in a few different ways. Once we’ve found what works, we finalize the lyrics and try the whole thing from start to finish. Any given song can take either minutes or months. We aim for a sound that’s somewhere between John Mayer, Maroon 5, and Santana. We try and draw on our favourite artists to pay homage to them in the only way we know how, writing in a similar style to them.

Unfortunately, due to this pandemic, we have no live shows planned as of now. However, we’ll be live-streaming a few times in June, so give us a follow @blackcreekreign to tune in! Our live performances usually start with a cover to draw the audience in, we find that’s a great icebreaker to get eyes and ears on you from the start. Then, we crank out some originals and sprinkle in a cover or so until the end. This has worked wonders for us so far and is doubtful to change anytime soon. We try and emphasize musicality in our performances too, and leave lots of time for on-stage jams and solos.

Our newest release “The Rain”. It’s a classic rock sound fused together with wistful lyrics, and you can interpret it however you wish. About a friend? Relationship? The choice is absolutely yours, and we leave things up to the interpretation of the listener. We’re very proud of the actual sound of the track too, we decided to go completely analog, and the full-bodied warmth of that really shows.

Too many to name! Across The Board, The Band Destiny, Earthphonics, The Cunninghams, The Jay Dee Band, and Shy by Shy. Just to name a few!