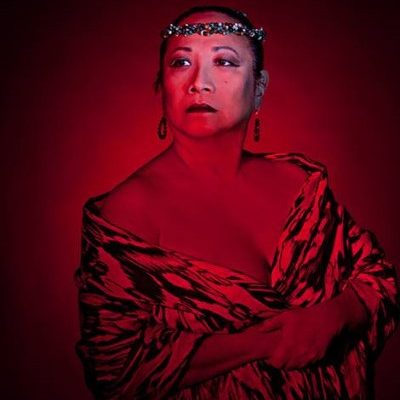 “‘Jerusalem’s Thorns: Civilian Remix’ is closer to my heart than the version released on the album,” Fe shares candidly.

This version is aggressive with a military tone that accompanies tribal sounds alluding to a battle cry stemming from her deepest wounds, she expands.

“It’s like a purging of poisons and toxins from (my) soul to rebuild a new normal.”

The track was originally from the album, Sugar Ko – translating to ‘My Wound’ in her native tongue of Tagalog. “Jerusalem’s Thorns” was the collective choice of Fe’s bandmates. “They liked the organic and not-so aggressive vibe of the tune, which was a cry and scream of frustration as (my) wounds healed,” she offers.

In both versions of the song, those tribal percussions introduce the listener — and brings Fe closer — to her Filipino roots as she continues to further her version of the Blues genre.

Check out “Jerusalem’s Thorns: Civilian Remix” below and find out more about Carolyn Fe via our Five Questions With segment.

Hi – I’m Carolyn Fe. I’m a Blues singer/songwriter and an Actress. I just released a single in honor of Asian Heritage Month (May) & Filipino Heritage Month (June). So I guess you guessed it, I’m a Filipino-Canadian artist.

The single I just released is called “Jerusalem’s Thorns, The Civilian Remix”. It’s a re-do of a song from my last album “Sugat Ko” (meaning, My Wound in Tagalog). This remix has bite; aggressive in manner, combining the soundscapes with the drone of chanting monks (done by me) and military tones that accompany tribal sounds that allude to a battle cry. This version, compared to the more organic sounds on the album’s version, is a painful purging of poisons and toxins while we find a way to build a new normal. Check it out: carolynfe.bandcamp.com

I have 4 albums out. A couple of them won a couple of awards in music, even got some accolades but what’s more important to me is that I am a working artist. There was once upon a time, I dreamt that I wanted to be a “star” but today, the fact that I have a roof over my head, food on my plate, clothes on my back, and regular work as an artist is superstar status to me.

I do love being on stage with my band. I call them my stage husbands. They are great musicians with a lot of stage experience so they really have my back. They’ve figured me out; my cues and the little nuances on stage so they can “play” with me. They know the looks and unspoken words I exchange with them so that they know when to hold back and when to step up to take the front center stage. It’s a real marriage.

As an Actress, I have a recurring role on a children’s show that airs on the Nickelodeon Channel. It’s called “Blue’s Clues and You!”, it’s a reboot of “Blue’s Clues” from the mid-90s, so if you have any toddlers at home, allow me to introduce them to music. I’m a dual-city-citizen of Toronto and Montreal so I travel back and forth for theatre, film, TV, and voice-over gigs.

I’d be classified in the Blues section and depending on the album, some would border on Rock (100%, released 2008 and Original Sin, released 2011), another bordering on Jazz (Bad Taboo, released 2014) and the last one, Sugat Ko (released 2018) would be split between Folk and Soundtrack’ish/alt-Blue’ ish.

With each album, there are songs which I call the “comfort sounds”. That’s where the listener can instinctively recognize the form, feel, and vibe of the song. But the gist of each album and my “raison d’être” is to keep pushing the genre to evolve. There is a conscious effort of me putting in songs that could be misconstrued as uncomfortable, and as we progress through each album, there are more and more songs that most reviewers proclaim as not the standard blues. I like it when critics say that my work is not for the ears of the Blues purist. I like being uncomfortable and making folks break old listening habits, it’s one of the ways humans evolve, no?

The lyrics are first and foremost to me when I get creative. They set the mood of the melodies and music. Of course, I write about love, love won, love lost for my “comfort sounds”, but I love to write about the darker shades and the extremities of the human condition: murder, rage, insanity, etc.

As time goes on, the sounds I look for come from my own Filipino heritage, thus the release of “Jerusalem’s Thorns, Civilian Remix”.

Sadly, at the time of this interview, with the pandemic and live venues in the dark; all my shows and residencies have been canceled.

When I am on stage, it’s a total release and I really don’t know how to explain my live performance. I myself don’t even know what happens to me on stage. I do know that my audiences have said that I am a combination of Sharon Jones with the theatrics of Tom Waits and the tongue in cheek of Mae West. Does that give you a picture?

Please take a listen to “Jerusalem’s Thorns, Civilian Remix”, because it’s where I’m at right now especially with what’s been happening in the world during this pandemic. People are not playing safe. People are coming out of the woodwork as if they were critters or something…which brings me to another song I wrote. It’s in the last album, Sugat Ko. The song is called “I Can’t Breathe”. I wrote it in honor of Eric Garner and at the time of this interview, my heart is heavy and in pain: Mr. George Floyd.

I know you asked for one song but…These two songs are a tie for me right now.

So there it is, I’ve emptied myself a little bit and I hope you can appreciate my path. Please stay safe, play safe, and be well.