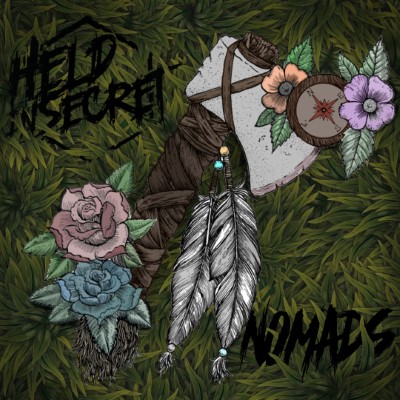 Metalcore has undergone its fair share of setbacks and developments since its emergence as a standalone genre in the mid-1990s. In the 2010s, the aggressive yet accessible style arguably reached its peak, with a seemingly endless array of bands coming out of the woodworks lead by genre giants Volumes, Architects, Parkway Drive, and Issues. Today, metalcore is in need of new artists who challenge the typical song formula in the industry. Ottawa’s Held In Secret dares to donate fresh new blood into the genre on their latest EP, Nomads.

When it comes to 2010s metalcore, the formulaic song structure went a little something like this: Heavy verse, poppy chorus, breakdown, and then finished off with another poppy chorus. This is what worked for new bands that wanted to make their name in the industry. The endless supply of bands who used this song structure has naturally died out, leaving the genre to those who bring uniqueness to the table. Luckily, Held In Secret draws nearer to the djent-ier side of things on their newest record, making their breakdowns that much more technical and their poppy parts much more sparse and thus, dynamic. The first track “Ties” gets off to a hot start, featuring an eerie, chugged intro fronted by a haunting guitar melody. Not long after, harsh screams are added in the mix. Screams often make or break bands in this style of music. These rough vocals, fortunately, require no effort to get behind. Every word is super punchy but at the same time, is mixed gently enough where the listener can make out most words.

Soon after, clean vocals make a welcome first impression in the first chorus of the record. Singing in metalcore is known famously for overusing autotune, but it’s evident that Held In Secret desired a more natural sound on their EP. These cleans are raw and real and are almost reminiscent of a rock band like The Foo Fighters instead of the overproduced genre-standard. With four minutes of strategically placed breakdowns along with a blend of violent screams and melodic breaks, Nomads makes the band’s identity clear on the very first song.

The second and title track on the album, “Nomads,” features guest vocals from Silent Planet’s frontman, Garrett Russell. California’s Silent Planet is undoubtedly one of the biggest bands in metalcore today, and Russell gives some insight into why that is on this feature. After some ominous drumming between verses, Russell chimes in, delivering an aggressive, energetic performance. “Nomads” is basically a collage of metalcore’s greatest traits. Technical chugs and harsh screams are layered with melodic background vocals, all to eventually be collapsed by a truly beautiful bridge. Here, the heaviness makes room for a lush, melodic section where orchestral sounds take over the mix. Layered with faint screams overtop, this may be the most dramatic piece of music on the album. It’s always fitting when the title-track of an album finds a way to channel the essence of a band like “Nomads” does.

“Downcast” and “Gaia” are the heaviest tracks on the EP. “Downcast,” the album’s over-halfway marker, closes with a breakdown that cleverly incorporates a bell-sounding instrument overtop. In turn, a mysterious noise is achieved that turns the closing remarks of this track into a real cliffhanger. “Gaia” makes the listener completely fall off the cliff though, featuring the album’s most brutal moment. At about 1:45 of the track, the genre-defining “BLEH” does its part in queuing a downbeat breakdown. The tempo is even slowed down here to truly shove it in your face.

“Static,” the EP’s last song and the first single released by the band, begins like the score of a movie would. An array of melodic choir sounds provides the foundation for passionately chanted clean singing. This quickly transitions into an anthemic guitar riff that screams early 2000’s metalcore.  The phrase “am I coming through okay or am I breaking up?” hints at the song’s title in the chorus and provides a memorable hook for the album to end off on. The last seconds of the record are spent on another sludgy breakdown where again, the tempo is slowed down to ensure that the listener is left with nothing to be desired. The meaning of the song, explained by vocalist Matt Zephyr, is nothing short of tragic.

“‘Static’ is an answer to a call for help, the opioid crisis is facing a record-breaking number of deaths caused by Fentanyl, subtly incorporated in Cocaine and MDMA. This crisis took a friend of mine, Tyler Hay of the Ottawa band Southpaw (now called Glaive). Someone who meant a lot to my small hometown and this song tells the story of how we all should’ve listened better; many people shy away from asking for help. Self-destructive behaviour is a call for help. And we all should listen better. For the greater good of the world.”

Nomads is an attempt at something new in the metalcore genre, and for that, the band deserves all the kudos in the world. To combine sounds that literally come out of an orchestra and pair them up with violent musical-malfunctions is a bold way to construct their sophomore EP, but Held In Secret made it look like no biggie. With their latest effort, the Ottawa band has solidified themselves as one of Ontario’s heaviest new acts.