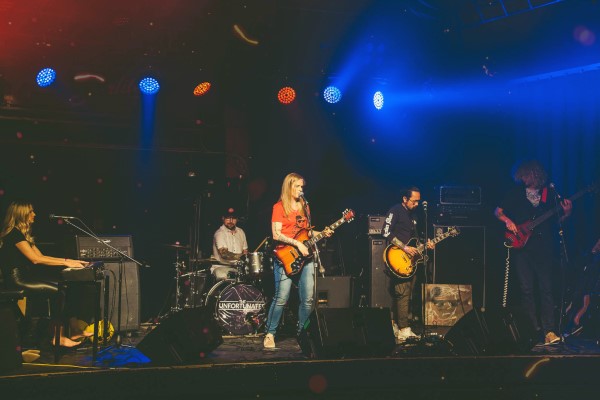 Every month we profile a Canadian independent artist or group that you deserve to know. This month we’re introducing you to alt-rockers, Selfish Bodies.

This Edmonton-based band formed in February 2018 – Brandy Sharpe, Michelle Bessette, Charles Bullcock, Deeka Jordan, and Will Wilk began their journey together in Will’s father’s basement and played their first show only two months after they created Selfish Bodies. They released their debut EP, Gold Hair, a year later.

They liken their sound to influences like Mother Mother, Twenty One Pilots, and The Arkells. Their goal is simple – to make the music they want to make; whether that means making fans laugh, cry, dance, feel, or all of the above.

Since 2018 they’ve watched themselves grow as a band, becoming more dynamic songwriters and performers. Their songs are written collaboratively; they’re adamant everyone is listened to and is able to bring their unique ideas to the table. They note their sound has taken more of a pop glaze over time, but still maintains the alt-rock edge they began with. As a band, they call it “more refined.”

It’s been a challenging road for these up-and-coming rockers. The grind and the hustle can sometimes hinder the passion to play and create new music, but their teamwork and constant communication has been key in keeping them going.

When they’re writing, the band looks to the world around them. “Everyday people influence the way we write the most. We ask ourselves: What are the biggest struggles that people face? What are people consumed by in good and bad ways? What can we say and what emotions can we evoke in people that will have a positive impact on them?”

Selfish Bodies released their latest single Waitress in April 2020 along with the music video. You can find their music on all major streaming platforms, Youtube, and ReverbNation.