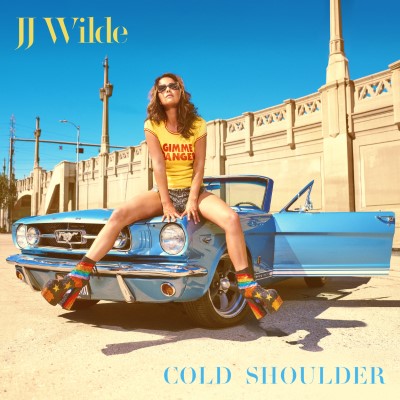 JJ Wilde, the Canadian rocker from Kitchener, ON recently announced that her anticipated debut LP, Ruthless will be available June 12 via Black Box. Ruthless will feature newly penned Wilde songs as well as some of her most beloved singles, including “The Rush,” which recently became her most successful single to date spending its fourth week at number one on the Mediabase Rock Big Picture chart. On top of being a chart-topping single, “The Rush” has also earned over 3 million streams globally.  Additionally, the album will include all of the tracks from her 2019 EP, Wilde Eyes, Steady; and her devastatingly vulnerable ballad, “Funeral For A Lover.”

“This album has been a long time coming and I am so excited to finally be able to share it,” said Wilde. “It started out as a writing trip to LA and over the course of my first year being signed, through many personal ups and downs, gains, losses, new experiences touring and traveling, I feel like this album perfectly represents the years of my life leading up to this moment and all of the changes that I have gone through, good and bad.  Between struggling to pay bills working multiple dead-end jobs, toxic relationships beginning and ending, it’s all in there. Ruthless will give listeners a first and very personal look into my mind, heart, and everything in between.”

The latest standout track from Ruthless, “Cold Shoulder” is also available now on all streaming platforms. The song taps into the kind of 70s New York vibe that might be more familiar with Some Girls-era Rolling Stones. The track blends back-beat grooves with her signature power-chord release in a way, unlike anything she’s done yet. A small taste of what’s new to come with Ruthless. “Cold Shoulder” was originally written by Wilde while at home in her kitchen and it originated as a slow 90s grunge song before handing it over to producer Frederik Thaae who upped the tempo and added a groovy drum beat that completely changed the song, and shifted its energy from desperation to empowerment. Listen to “Cold Shoulder” right here.

“After sitting on these songs for what seems like forever, I am over the moon to be able to finally put this one out, especially at a time like this,” shares Wilde. “With everything going on and the industry at what seems like a stand still, I feel very lucky to still be able to create, write, and put out music.  Cold Shoulder is one of my favourite songs to perform live. It is an angsty cry for recklessness, and to feel alive.”

The new songs on Ruthless mark an exciting next chapter in Wilde’s hypermodern evolution from a fan-favourite underdog touring alongside The Struts, Incubus, The Blue Stones, The Glorious Sons, and more to one of rock’s most promising rising songwriters and performers.

Recently, Wilde brought back her beloved live cover Instagram series called Coffee and a Cover. Watch her live-at-home cover of Amy Winehouse’s “Back to Black” here.