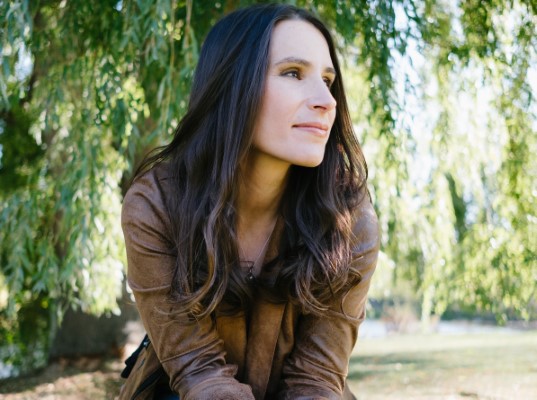 Ottawa, ON-based singer-songwriter, Kristine St-Pierre has released a new single, “Break In The Sky” along with a lyric video to accompany the release.

Check out the lyric video below and find out more about Kristine via our Five Questions With segment.

I’m Kristine St-Pierre and I’m a singer-songwriter living in Ottawa, Canada. I’ve been performing my own music for about 13 years now, and have also released several albums. My latest EP called La promesse was nominated for a Canadian Folk Music Award in the Francophone singer-songwriter category. I tend to perform on my own a lot, just guitar and vocals, but when I do play as a band you’ll likely find me with a cellist, an electric guitar player, and percussionist.

Parallel to my music, I am also a consultant on equality issues, which has allowed me to travel and work with incredible people around the world. I also have a daughter who’s 5 and a son who’s 2 and a half.

I’d say it’s a mix between introspective folk ballads and toe-tapping country-blues songs. I often write from a very real personal experience or feeling and hope that it touches others in some way. I get very much inspired by my life experiences, my travels, the people I meet, but also by my observations on the world around me.

At this stage, I don’t have any upcoming shows. I have had some great opportunities to perform from home over the last two months and am just planning my next steps. You can check out my website or my Facebook page to see past Livestream shows and for any upcoming show announcements.

I’d love for you to listen to my new song Break In The Sky! This is a song I wrote many years ago following my first cross-Canada tour, but had never recorded it. It’s really about trusting the journey that you’re on, and about not giving up. It’s a simple message, but I think it’s important to keep reminding ourselves.

For the recording, I worked with Dean Watson at Gallery Recording Studios, who engineered and produced the song. We brought in Raphael Weinroth-Browne on cello, Chris Zimmerman on drums, and Justin Lacroix on mandolin and harmonies, with mastering done by Jay Fee at Conduction Mastering.

I love each artist’s songwriting and the different productions – from super simple with one or two instruments to a more intricate sound, but both incredibly effective in their own ways.