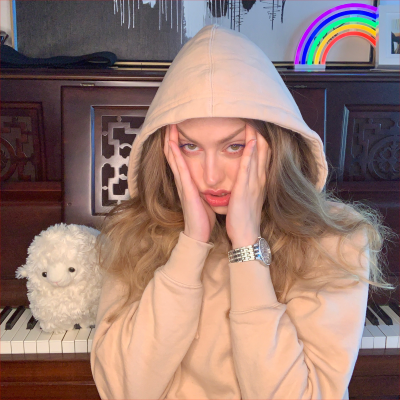 Check out the release below and find out more about Betta Lemme in our Five Questions With segment.

I never know how to answer this. Dance Pop. My music is written/sung in English, French, and Italian. The songs go from orchestral dance-pop to very 00’s dance-pop. There’s no in-between. Writing style? I sit the piano, start things quite raw, pop.

Not yet. Somehow, things went backwards:L I’ve played with friends on a Coachella stage and have performed my first song on live television but I’ve never actually got to play my own show yet. Once the world is back to normal, I’ll definitely be planning some shows. I’d expect a lot of dancing, stank face, piano playing, a bit of stage fright and without a. doubt, glitter.

Hmmm… I’d start with the first song I released called BAMBOLA. The drop is nasty. This song was written and performed in 3 languages: English, French & Italian. You can hear the orchestral 60’s pop influence in the production. Bambola was written with Rick Markowitz (Melanie Martinez) & Scott Harris (Shawn Mendez)

Hmmm…
Arcade Fire. (Remember that Grammy performance where they played with BOWIE? Goosebumps)
Jessie Reyez (I’ve been really into her lately. Her lyrics cut through the speakers and I’d love to sit by the piano with her.)
Celine Dion (I’m actually answering these questions in a CELINE Sweater lol. I went to her COURAGE tour in Montreal just months before the world paused for COVID… I’ve never cried too much at a concert. Love how human she was and her voice remains unmatched. The energy in the Montreal arena was EXPLOSIVE! So proud she’s Canadian.)
Carly Rae Jepson. (POP. POP. ALL DAY.)