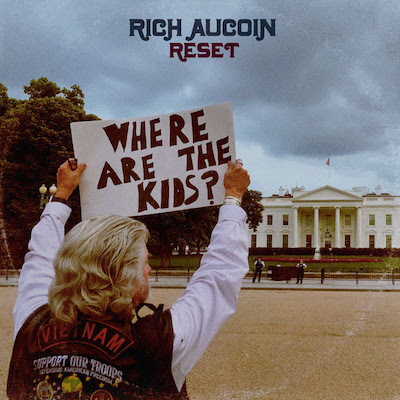 ​Last week, Nova Scotia indie rocker Rich Aucoin shared his new single and video for “Reset” and announced his 4th album entitled “United States”. Aucoin wrote the album, observing America from the ground level, while cycling across it for Mental Health America (as well as the Canadian Mental Health Association). While taking this Robert Frank approach, Aucoin composed a song for each of the 12 states he pedalled through. The record is as much about the current socio-political climate of America as it is about states of consciousness; as much fuelled by the burgeoning American protest movement or Hedges’ social commentary as it is fuelled by McKenna/Pollan world of psychedelics and meditation apps.

I wanted to really see the states alone as an observer with lots of time to process the experience. I’ve loved touring there and was interested in how such a progressive country could elect their current president. After cycling through town after town with decaying downtowns where photos were displayed in the local cafes showing the town in full bloom after the second world war, I could see how his propaganda of ‘Make America Great Again’ really conned people. I spent a lot of time on social media and alone over those months and could see how the states had re-entered a period that felt like the late-60s again with both a resurgence in student protest movements and a renewed interest in psychedelics. I was also meditating a lot and thinking about these things while riding.

“Reset”, the second single after “How It Breaks” from “​United States​”​, is another protest song from Aucoin with this one being an anti-gun anthem. “I started the ride across America just after the events of the Parkland shootings so it was very much in the news and I wanted to write something immediately that spoke to their frustration with the gun laws in their country.” Aucoin had previously recorded audiences from several summer music festivals including Vieilles Charrues, Evolve, Ottawa Bluesfest and Canada Day in Trafalgar Square in North America and Europe in the summer of 2012 and went back to those recordings to get the large sound of a crowd of approximately 20,000 people for the wordless choruses. The song also features the all-star vocal group of Kyla Carter, Simone Denny, Maylee Todd, Carleigh Aikins, James Baley, Tarik Henry.

​”United States” is set to be released on September 18th via Haven Sounds, and you can already pre-order/pre-save the album here!​