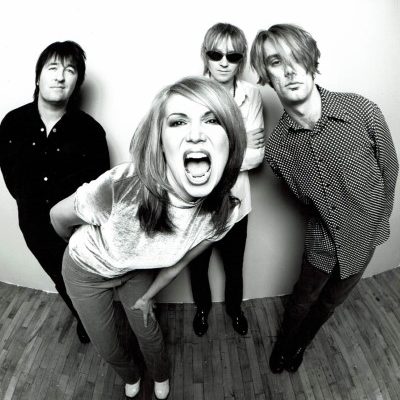 Toronto’s Universal Honey has re-released their debut album from 1994, Magic Basement. It was recorded using the legendary Neve console and 2” tape and was mixed by Jim Rondinelli (Matthew Sweet, Big Star, Sloan, The Odds) and mastered by the iconic Bob Ludwig.

Check out the album below and take a few moments to find out more about Universal Honey via our Five Questions With segmetn.

Hi, our names are Leslie Stanwyck and Johnny Sinclair and we are known as Universal Honey, a band from Toronto.  We have also released music as The Bod and most recently with our current band Tucker Lane.  We were originally in The Pursuit of Happiness and recorded Love Junk and One-Sided Story, both with Todd Rundgren.  We then went on to form Universal Honey and put out 7 independent albums.  Currently, we are in the process of re-releasing all 7 of these albums in chronological order throughout 2020 to streaming platforms.  We started with our debut album Magic Basement in April 2020.  They have never been available in this format before and have been out of print for a considerable amount of time.  We also write with and produce other artists with our label Honeytunes.

Well, our music is based in pop but we love all genres, so we enjoy experimenting.  Pop-rock is our natural state, although we have written songs that are electronica and Americana.  Our songs are mostly written on acoustic guitar.  We often try out different writing processes as we can either start with lyrics or with a melody.  We also love collaborating with other writers.

Sadly, all of our shows have been canceled due to Covid-19.  We like to play live as much as possible and don’t turn down many gigs.  We just did a live streaming show with Sam Grosso of The Cadillac Lounge Productions.  We had a lot of fun with that experience and we will be doing more or them.  We’re really missing playing with our band and can’t wait to get on stage again.  We are a 4 piece band, 2 guitars, bass, and drums and we like to kick it out.  We work hard to put on a good high energy tight performance.

Just Before Mary Goes from our Universal Honey album Magic Basement.  That song was used in a lot of television shows and movies and it has just been picked up by Ace Records in the UK for a girl-power pop compilation.  It is a rockin’ song with a sweet melody and hooks aplenty.