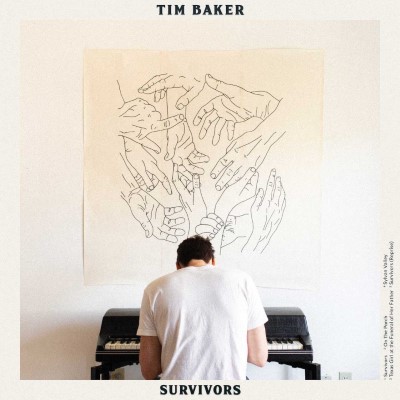 Tim Baker has unveiled the title-track from his upcoming five-track EP, Survivors, set to be released on July 10, 2020 via Arts & Crafts.

Survivors started with Baker “marvelling at the almost inconceivable amount of generational resilience and luck it requires to get a person to ‘now’”. According to Baker, “just by being alive, you really are this incredibly unlikely success. I kept imagining how I got to be here, alive, and all of the ancestors that came before me.”

When it comes to writing songs, Baker says that he always worked on twenty songs with the task of keeping ten. His debut album was no different. Baker says, “You’ve maybe heard some of the songs that didn’t make it, on the Side Door Sessions. Or you’ve maybe heard some other survivors at a live show. Well, some seemed so relevant to the current moment that they basically stood up and demanded to be let out. Being no tyrant, I dusted them off, smoothed their lapels, and resolved to send them on their way, on this new EP.” Knowing this, Survivors is a fitting name. Maybe one of your favorite unreleased tracks made the cut!

Baker’s latest EP comes a little over a year after his debut solo album, Forever Overhead. This is the “album that would go on to earn distinctive year-end ‘best of’ billing and landed Tim aloft within the 2020 “Songwriter of the Year” nominee category for the 2020 Juno Awards and seven ECMA nominations”

Baker is set to perform these new tracks, along with others from his collection, in two upcoming online concerts on May 29 and May 30 via Side Door. “The shows will be hosted on Zoom and be capped at 1000 person limit per show. Each ticket purchased receives a digital download of the Survivors EP. Winnipeg Folk Festival will present the shows and Plus1.org will donate $1 from each ticket sold to www.portage.ca for their bunkhouse initiative.”