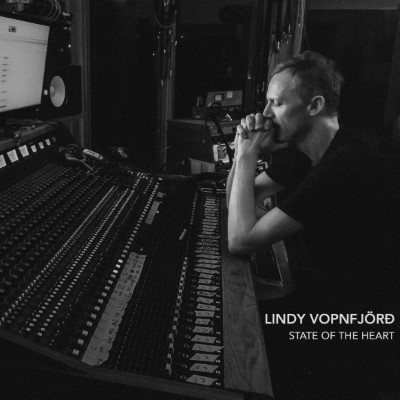 Few folk artists have the ability to find and maintain the perfect marriage between sonically-crisp production and adept storytelling the way Lindy Vopnfjörd has managed to do so on State of the Heart, his latest LP.

Upon first listen, it becomes clear that Vopnfjörd has found his groove with crystalline one-liners that effortlessly push his narratives along. In each of the 10 songs, the listener can easily pick out multiple lines that set an underlying tone on the record, lingering throughout the mix like the smell of an old home.

The LP commences with its title track, “State of the Heart,” a song that brings the listener right out to sea with a huge wall of string instruments in a reprised intro section. The aforementioned one-liners make a bold first impression in the album’s first chorus, where Vopnfjörd cries out: “This was meant to be a protest song, but the politics were wrong,” a monumental phrase sang to a grabby melody reminiscent of Oasis. In fact, a lot of the harmonized melodies evident on this album sounds like Vopnfjörd was making an attempt to become the Oasis of folk music, which is undeniably a good thing to be.

The album continues with “Already Over My Head” that switches up time signatures, forcing an entirely new narrative on the listener. This song is a quick diddy compared to the opening track, but the calm, gloomy nature of the track makes it seem like its own complex journey.

“Breathe” is another song filled with juicy wordplay, featuring the mature, recurring line: “Everybody says it’s up to fate / Taking it slow doesn’t mean you hesitate.” The instrumentation in this song is moody and almost ominous as if Vopnfjörd knows something we all don’t.

That’s the thing though, this record makes it very apparent that we can all learn a thing or two from Vopnfjörd and his songwriting. State of the Heart is his eighth studio album, having been pumping out records tirelessly since 1995. His maturity and general experience is what makes this album such a breeze to listen to. Vopnfjörd’s singing voice has developed this unique underlying emotiveness throughout his years, making it sound like he’s actually one of the characters in the stories he tells on the LP. It’s as if he’s this old, respected soul, sitting the listener down and spewing knowledgeable life lessons at them, assisted by his age-warped raspy voice that suits the mix flawlessly.

State of the Heart gets from one point to another via reliable vehicles such as “Letters” a song sung in first-person telling the story of one who writes a letter to a long-lost loved one. Complemented by whaling harmonicas to push Vopnfjörd’s folky agenda, the track is a slow-moving three-minute storybook. “Maybe the Sun” is easily the poppiest on the album. It’s a radio-friendly happy point that the album has yet to experience. The chorus is arguably more anthemic than the album’s title track and shows off the true impressive vocal range of Vopnfjörd that was too shy to stick its head out before this song. The upbeat, folk banger fades into “Cutting Room Floor,” a track that begins with an experimental electronic break overlapped by guitar feedback. “Turns To You” is a true love song accompanied by soft percussion and lyrics that touch on vivid memories of old. “Nothing quite compares to waking up in your room” is a line that embodies the song’s nostalgic feel of a past love.

The album closes with a ballad in “Until I Have To Let You Go.” A glorious fingerpicked guitar sets the tone for the beginning of the end of the album. Picturesque lines such as: “Even though I know you’re going to skin your knee on the dusty gravel out on the road, I’ll hold on as long as I can before I have to let you go,” captures the most tragic parts of a childhood memory, illustrating loss through the effective method of nostalgia. This song repeats its title multiple times, but it never loses its emotional edge because of Vopnfjörd’s touching vocal performance. There’s something to be said about the very last note of the album. Chiming in is this blissful note that sounds right out of a music box your parents kept around when you were growing up. This simple noise adds a handful of sentimental value to the album.

State of the Heart is a state of the art Canadian folk record. Vopnfjörd has exhibited emotion, pristine storytelling abilities, and memorable melodies in both his singing and instrumentation. His eighth record is poised to be his most successful yet, with rejuvenating production that contrasts his two-and-a-half decade long music career supremely.