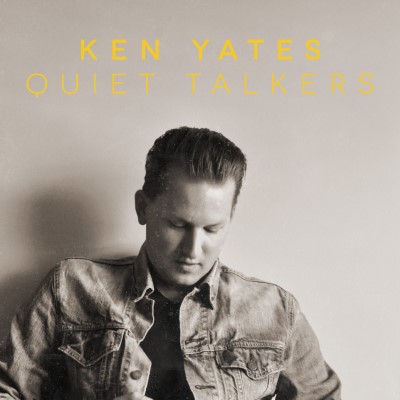 Is emo-folk a real genre? Ken Yates’ newest album, Quiet Talkers, might be one of the saddest, realest folk albums available right now. Taking lyrical and stylistic inspiration from indie poster-girl Phoebe Bridgers, Yates has created a doom and gloom atmosphere with a flare of western-style music, giving new and old listeners of the genre something to love.

What’s most striking about this record from the get-go is Yates’ chilling lyrical ability. Yates says that the collection of songs can be described as “thoughts from the quietest person in the room.” Upon listening to Quiet Talkers, you will never overlook the “quiet person” in a crowd of people ever again, because if Yates’ description holds true, those timid individuals always have the most thought-provoking things to say.

“Grey County Blues” cracks the album open on a truly inspiring note. In the real world, pessimistic and hopeful hold opposite meanings, but in Yates’ latest effort, he makes the adjectives fit together like puzzle pieces. “Hang me on the line, leave me out to dry,” is the album’s opening line, and it grabs the listener by the throat. “I couldn’t tell you why the seasons roll on by, but I am frozen still. If I don’t know by now I don’t think I ever will,” is the last line, complemented by a melodic, fingerpicked guitar. The closing sequence simply hangs you out to dry, leaving you needing more of the somber state of mind Yates has reopened.

“Surviving Is Easy” was released as a single prior to the album’s drop, and for good reason. The song is more upbeat and major than its predecessor but still manages to pick up right where it left off. Exclaiming over and over that “surviving is easy, but living is hard,” the line between actually living with purpose and being alive is firmly drawn here, forcing the listener into a state of self-reflection. The supporting instrumentation doesn’t push the song’s sappy agenda as it’s rather fast-moving, but I think that’s the beauty behind it. A sorrowful song shrouded by an easy listening, well-paced soundtrack is an instant classic due to its accessibility.

A couple more questions here: Am I allowed to be so self-aware in album critiques? Also, are sad folk songs allowed to be considered bangers? I’m asking because Quiet Talkers begins with three consecutive bops. “Two Wrongs” is the third installation of songs from the record, and again, was released as a single beforehand. More clever lyricism and cinematic, reverberating synth sounds drive this song along smoothly. “Too dark to see the light, two wrongs make us right,” takes the classic idiom, “two wrongs make a right,” and flips it on its back. The song explores how two flawed people can find perfection within each other.

“Quiet Talkers,” the album’s title track, is yet another hit. Fittingly, it encompasses all of the album’s themes in one song. Exhibiting a steady drumbeat, melodramatic vocals, and all-too-dramatic lyricism, the song plays it safe as the beacon of the LP.

“Safe From Yourself,” speaks about struggles with one’s mental health. Here, Yates speaks about a loved one and how he strives to help them through their hardships. Hardships, in this case, being their own tendencies. “I’ll keep you safe from yourself,” is the sweet hook of the song, pricking the listener in a comforting way as Yates’ echoey voice rocks you to sleep.

One of the most bittersweet instances on this album comes from the song “Evangeline.” If my name were Evangeline, I’d want this song to be my theme song. The line “Life can be a gold mine if you’ve got a good mind. Stay inside the right lines, but don’t keep it too clean, Evangeline,” is one of the more hopeful groupings of words on the LP. The song fades into the poppy, “Anchor And Sail,” that while still storytelling-focused, has some of the most catchy parts on the album. It’s a short but sweet song that makes room enough for the album’s conclusion.

“Pretend We’re Alright” is the answer to the questions the previous songs proposed. This calm realization of a track has Yates’ voice met by the presence of a womanly harmony here, and it’s a most welcome addition. This new musical commentary, to me, is the embodiment of the person that’s been talked about ever so much before this point. It’s so symbolic to finally hear this new perspective on the finale.

With Quiet Talkers, Yates reached out to those who are down in the dumps and let them know that they’re not alone, which is fitting in these times of social isolation. Although not the most dynamic record out there, Yates manages to strike emotional chords through a calm, cinematic nature as opposed to an in-your-face type approach, which is an impressive feat on its own. Following up from his 2016 LP, Huntsville, Yates has now asserted himself as one of Canada’s most unique folk artists with a true knack for effective songwriting.