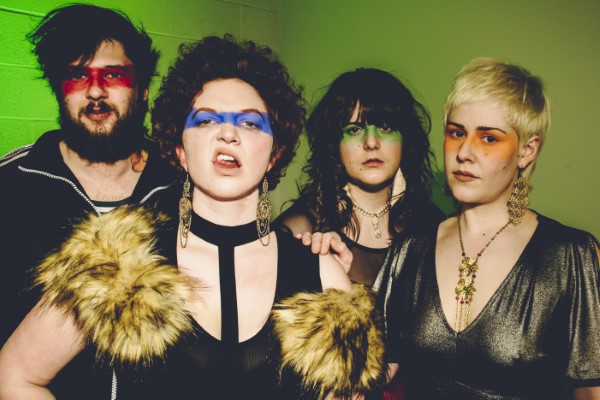 Edmonton, AB-based four-piece band, Bad Buddy has released their new single, “Hunters”. The single is punchy-punk poetry reminding us of where we came from and who we used to be. The lyrics evoke a sense of nostalgia felt by a society removed from its primal roots.

The band is set to release their full-length self-titled album on July 19, and “Hunters” is the exciting preview to that, and it will surely get you pumped up for the rest of the album.

Check out “Hunters” below, and find out more about the band via our Five Questions With segment.

Our music is the result of what happened when we didn’t put any limitations on ourselves to be something. We have all been kicking around the music industry for a while, and so when we joined forces for Bad Buddy and talked about what kind of band we wanted to be, we mostly focused on all the shit we felt we’ve never been able to get away within any other project. We just wanted to have as much fun as possible. We also knew it’s not fun if it sucks, so we have held ourselves to a pretty high standard of composition and performance. We wound up with a genre-bending, ass-kicker of a band, and we continue to push ourselves to be better.

I would describe the songs as unbridled, high-energy bangers with a twist. The songs are sincere and honest, packed full of serious lyrical content conveniently veiled by upbeat riffs. Gang vocals, guitarmonies, and catchy as all hell.

We like to leave it all out on stage when we perform. We throw our bodies around the stage and really try to engage the audience. We want it to be really entertaining. You can go listen to the perfect tracks at home, but when you’re at a show, it should be a SHOW. We like to take chances and work ourselves up a little bit and lose our breath. Big outfits, big makeup, big personalities. But, if you don’t take our word for it, this was posted in the Edmonton Journal after journalist, Fish Griwkowski, came to one of our shows. He described it as “… a totally raucous and amazing show all around: psychedelic surf, punk, pop, you name it – though above all it felt like something NEW.”

We each chose two!