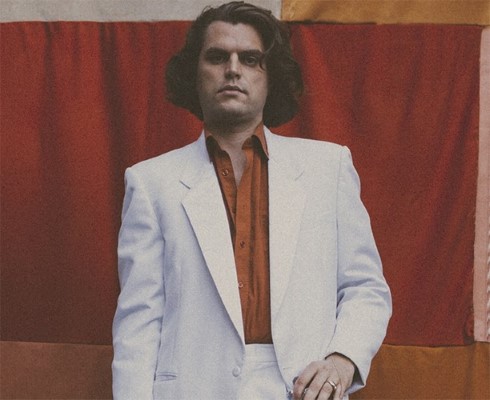 Montreal, QC-based alt-rock singer-songwriter, and Hoan frontman, Alex Nicol has released a new album, All For Nada, along with a single, “Two Times A Charm”, via Anniversary and Michel Records.

Directed and edited by Alexander Maxim Seltzer, and produced by Nada Termerinski and AMS Films, the video for “Two Times A Charm” serves as a lushly fevered, retro-drenched dream into the prickly and uncomfortable deception of understanding.

“We know that we don’t control the flow of our ideas, and that they are, by nature, difficult to understand,” Nicol expands. “And sometimes, even if we like to think we have ‘overcome’ feelings, thoughts or behaviours from the past, we are actually deceived by a false sense of self-awareness.

It is this process of self-deception that’s dramatized in the video, in which thoughts materialize in the form of a blue box which the protagonist is unable to get rid of, even if he tries as best as he can.”

Check out the video for “Two Times A Charm” below, and find out more about Alex via our Five Questions With segment.

My name is Alex Nicol. I’m a songwriter based in Montreal. After playing in bands for years – you can check out Hoan, Loon, She Divides, Blanka … the list goes on – I recently put out my debut solo record, ‘All for Nada’. The album is partly a dedication to my girlfriend, and partly a collaboration with her.

I make indie rock music, which, depending on how you feel about genre tags, is either a helpful signifier or a vacuous term. I write songs to get messages across, so the voice is paramount. I also strive to create a specific ambience with my music; I’ve been told my sound is atmospheric, which is definitely intentional. I like music I can sink into. I like space, layers, textures, feeling, opacity, mystery, (even dirt sometimes), in the recorded music I listen and make. In short, I go for the vibe instead of the pristine. With lyrics, I go for the confessional and the universal, always trying to find a meeting place between these two poles. I think worlds of meaning live in the implied, suggestive, unclear, spaces in-between.

No live shows coming up, but when I do play live, the setup is always based on the venue.

I have played these songs as a duo and as a band of five. The full group includes a synth player and back-up vocalist, guitarist, bass player, and drummer. We strive to create a vibe similar to the record, though with a bit more energy here and there. We also pull out more vocal harmonies than on the record, which is nice. My sister and brother play in the live band – it’s a real family affair.

I think “Two Times A Charm” sums it up pretty well.