Five Questions With Weigh The Anchor 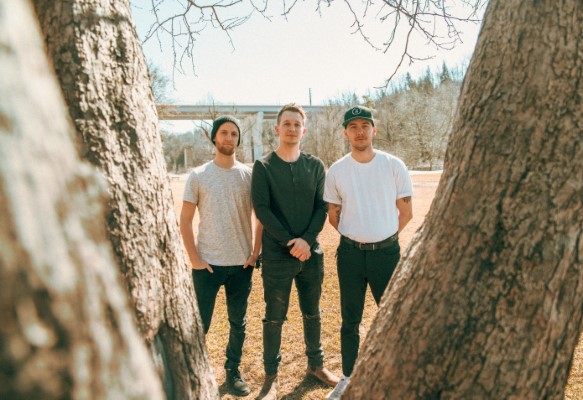 Oakville, ON-based pop-punk band, Weigh The Anchor released a video for their new single, “Medicate” yesterday. The band will be releasing their new EP, Right At Home this July, so consider this track a sneak peek!

Hey, this is Brad, Andrew, and Brendan from Weigh The Anchor. We’re a pop-punk band from Oakville, Ontario.

Our writing style has changed a lot as we’ve been a band. With our newest material, we really feel like we’ve found what works best for us. We try to work off each other as much as we can, when one of us has an idea we show each other and either build off it together or put it aside. We try to lay out the basis of the music first and then start putting vocal melodies in place to figure out the overall feel of the song and then start filling in the rest. As for our music itself, I think it all comes from a place of wanting to play in front of an audience, so everything we write comes with the intent of doing exactly that. Our influences span across every genre imaginable and each song draws from different aspects of that. We fall under the pop-punk umbrella, but we like to venture out into heavier elements and into some other areas that we haven’t shown quite yet.

We’re a band that likes to have a lot of energy while we play. We like to be moving around and getting the crowd moving with us. We spend a lot of time on our live set to make it sound as close to our recordings as possible so the band you hear on Spotify is the same band you see live.

We just released a new song called “Medicate” on May 15th. It’s the first song off our upcoming EP and it most accurately represents us as the band we are today.

Canada has some of the best bands going right now. We all grew up in Ontario watching bands like Silverstein, Alexisonfire, and Sum 41 and still listen to them today. But a few of our current favourites are Youth Fountain from Vancouver, Bearings from Ottawa, Calling All Captains from Edmonton, Like Pacific from Toronto, and of course, Seaway who are also from Oakville.