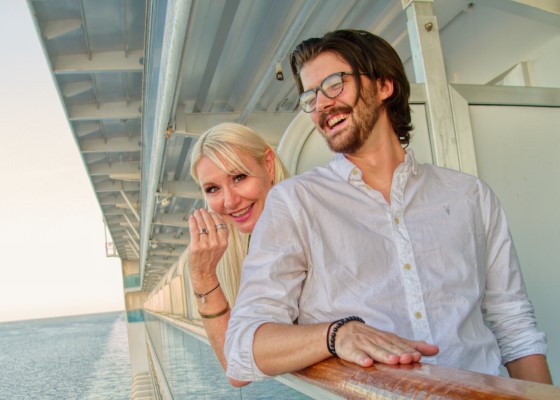 Over the past few months, there have been many restrictions put in place, keeping many of us from doing the things we once did without a second thought. Many have had to adapt and make the best of the situations in which we are faced. That is exactly what Canadian singer Jennifer Simser and musician Daniel Nogueria did while creating their original song “You’re Not Alone”.

Simser and Nogueira are only two of the thousands of cruise ship employees that have been unable to return home due to the regulations surrounding Covid-19. Both were part of the crew stranded aboard the Caribbean Princess (unaffected by the virus itself) for nearly 60 days without passengers. Simser and Nogueira, “longtime colleagues and friends, were aware of the toll the isolation was taking onboard other cruise ships and wanted to write a song that reflected their appreciation to the staff on their ship and all employees stranded at sea, passengers, and the cruise line itself. Their main goal when writing the song was to reach out, through music, to those feeling the impact of the isolation Covid-19 was bringing, especially to their colleagues and the entire seafaring community isolated on nearly empty ships.”

It was through this inspiration that ‘You’re Not Alone’ was written, produced, recorded, and filmed all while stuck at sea. Since its initial release, the video has gone viral, with over 130,000 combined views. According to both Simser and Nogueira, they wanted to reach out to their team members on other ships, “to lift their spirits, and send love and support. Princess was treating its crew and passengers with great care and we were grateful to the company for their efforts to keep us safe and get the passengers home. We wanted to share the other side of what the media was not seeing/sharing”.

All proceeds from this song will go to the Princess Cruise Lines Community Foundation.