The Brooks share new video for “Turn Up The Sound” 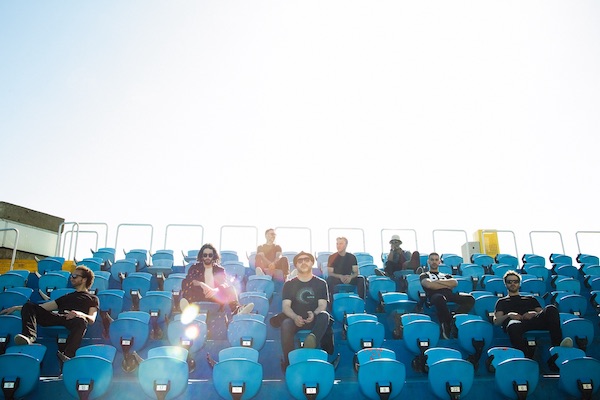 Photo by ME Mongrain

We last caught Montreal’s The Brooks on the opening night of last year’s Montreal Jazz Festival, with an amazing funky show which set the crowd on fire. Almost a year later, the band just announced their 3rd studio album, “Anyday Now”, to be released in the fall via Duprince and Underdog Records. They also shared a sneak peek with new track “Turn Up the Sound”:

Named the “best kept secret of Canadian funk” by La Presse, The Brooks are fronted by the icon that is Alan Prater. the Florida-born musician who has toured with Michael Jackson and the band itself was born behind the walls of the legendary Motown Museum thanks to bassist Alexandre Lapointe, who has worked alongside such artists such as Joel Campbell (musical director for Tina Turner and Janet Jackson). Prater and Lapointe are joined by Maxime Bellavance (drums), Philippe Look (guitar & vocals), Daniel Thouin (keyboard), Sébastien Grenier (saxophone), Hichem Khalfa (French trumpet), and Philippe Beaudin (percussion).

The first track to be taken from the forthcoming album, “Turn Up the Sound” is a song about escaping your everyday by simply playing the music loud. Speaking on the track, frontman Alan Prater explains​:

“I just wanted to write a fun song to get you to escape from whatever you’re doing.”  The Brooks is a band that wants to spread happiness, and funkyness into people’s lives and there couldn’t be a better time to release this song and help people get out of the pressure of the confinement.

In their live shows and in their records, you can hear James Brown’s meticulousness, D’Angelo’s delightfulness, Fela Kuti’s radiance, Herbie Hancock’s intergenerational openness, and J. Dilla’s innovative spirit. These heroes of music didn’t let rules and trends dictate their messages, and neither do The Brooks. Just like these history makers, they built their reputation with sweat and rigor, outside of conventional channels.

The Brooks are incredibly hard workers united in a project where pleasure and complete artistic freedom are the only key words. After 8 years of existence, with an EP and two albums, they have already won many awards and nominations (GAMIQ, Independent Music Awards, ADISQ…) and built a solid reputation in the Quebec indie world.