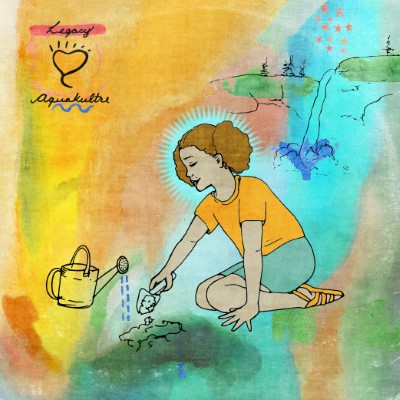 Usually, it’s not shocking in the slightest when an album dwells on themes such as ordinary relationships or struggles with mental health. But, on Legacy, Halifax-based Aquakultre has presented these topics in such a way that makes them feel as if they’re being viewed from an entirely new perspective. Funky, clever bars meet soulful melodies and angelic orchestral performances to generate an album like no other.

Having never listened to Aquakultre before, the first glimpse into the record, “Legacy,” had me completely puzzled as to what exactly was going on. Usually, title tracks encompass all of the album’s components and channel them into an anthemic track, but this one acts more of a theme song or a foundation for the rest of the record to take off from. The lyrics, while simple, were relatable and prominent right off the bat as vocalist Lance Sampson battles with the difficulty of making life truly count. Lines like “afraid to die alone, that’s why I’m trying to find what we call a home,” exemplify Simpson’s eagerness to make something beautiful out of his time on Earth.

Passages like these are taken to a whole other level when learning of Aquakultre’s backstory. Lance Sampson was 19 when he was sentenced to five years in federal prison where he decided he wanted to turn his act around and become accomplished. The artist went from being a criminal to being crowned the winner of CBC’s Searchlight Challenge in a matter of years. From there, the album becomes clearer and clearer. Sampson wants to leave behind a virtuous Legacy.

This album really has everything you need. Tracks like “657” and “Wife Tonight” are filled with funkiness. These are the tracks that really make you want to get off your feet and let loose. “Wife Tonight” features the most dynamic vocal performance on the album, displaying Sampson’s raspy, rangy voice at its finest. “Don’t Forget” and “Open Your Eyes” are filled with melancholic emotions. The former features lush sounds from a choir to play off of Sampson’s vivid storytelling ability, all played to a classic 6/8 R&B style beat. The latter is a stripped-down, unplugged acoustic track where Sampson deals with an uneasy relationship. A womanly voice provides a glorious backdrop for the track. It gives it another dimension as if Sampson is singing directly to her. “Trying to get out of bed for me has been a full-time job,” is one of the most heartbreaking, relatable lyrics on the record, especially when knowing Sampson’s less-than-ideal history.

“Questionable Intentions” reminds the listener that Aquakultre is an adequate rapper. His forte though is his ability to form emotional bars in such a way that paints clear pictures in your mind. The song hints at Sampson’s past and how it’s affected him up until now. The song comes across as if it’s dedicated to his own demons.

“Pay It Forward,” the last track from Legacy, is another entity filled with soul. The song sounds like a happy ending, and honestly, why wouldn’t Sampson celebrate? This is his first full-length record after releasing a string of singles and EPs, and Legacy is set to breathe more life into his already-decorated career than ever before. The sound of clapping makes its way into the mix to signify the close of the LP. It’s clear that if Sampson’s goal was to make this album leave him a legacy, he’s done it. With Legacy, he has painted his R&B canvas with colours scarcely seen before, in turn creating a one-of-a-kind, groovy yet emotional piece of art.