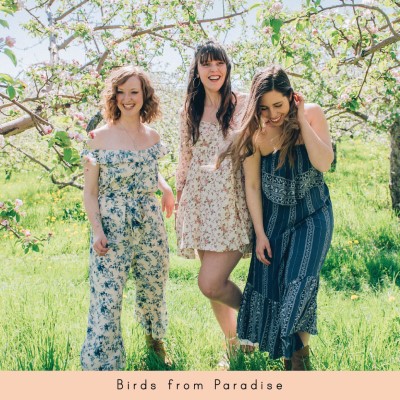 It’s always refreshing when an album can reassure the listener that everything will be okay, especially now when the world outside is going through a chaotic, once in a lifetime event. Birds, the debut album from Montreal trio Birds From Paradise, takes you on a 10-song vacation to sonic-bliss heaven, where each track sounds like it could be a theme song to a children’s TV show, in the best way. The album alludes to the most beautiful parts of the Earth while most people are stuck in isolated environments, passing on a sense of sheer hopefulness from the get-go.

“Strawberry Orange Delight” sets the record in motion, and yeah, the song sounds exactly like its title. With playful lines like, “Chocolate ice cream dreams” and “Your ocean eyes are paradise, they change with the colour of the sky,” the band does an outstanding job of painting wholesome, flavourful images inside of your head. Singing throughout the track in an angelic, octaved harmony, Lauri-Anne Francoeur, Florence Théoret, and Olivia Sirois-Bruneau prove they’re as sweet as ear-candy from Birds’ very first words.

“The World Is Your Oyster” is a song that if I were a parent, I would sing it to my kids before they fell asleep each night. The song has this uplifting natural spirit to it as if mother nature is singing this song to me directly. I feel like I’m in my early years, camping with my family again upon listening to this track. With a song structure reminiscent of legends Simon & Garfunkel and lush harmonies similar to those of country-folk icons First Aid Kit, Birds From PAradise is taking notes from some of the greats while simultaneously adding their own charm into the mix.

By the time you reach “Morning Bright,” it’s clear that you can settle right into Birds and truly make yourself at home. The opening line “Honey, when it’s dark, take a look outside and see there are a million stars,” is literally an excerpt from what a loving guardian-figure should say to their young ones. This whole album at this point has felt like childhood affection, which was definitely an intentional decision by the band. They wanted to recreate a warm, lost feeling in the listener. The fingerpicked and slide guitars in this track are familiar yet brisk and new, like the breeze from rolled-down car windows on a road trip.

The album’s halfway point, “Only Love” is tragically glorious. The lyrical content is still optimistic, but the emotive instrumentation vocal performance gives the song a sense of moodiness unseen in its counterparts. Tracks like “Tumbleweeds” and “Flashover” move at a faster pace while still letting the listener stop to smell the roses.

“The Ride,” was released as a single prior to the album’s drop, and it’s no wonder why. It has a little bit of everything. Cute, affectionate lines like, “Maybe we’ll be old and tired, but at least we’ll finally have each other,” drive the song along at a perfect pace. The harmonious effort from the triad is exhibited like never before on this track, as all three of their voices intertwine to create an unmistakenly joyous soundscape. The song fades into the album’s finale, “Berceuse,” which is in the same key as “The Ride,” giving the record a cinematic, meaningful ending. To play along with the album’s organic theme, it ends with an acapella performance from the group. The stripped-down, raw performance still takes up so much space with their larger-than-life singing voices. “Berceuse” is a true lullaby.

Birds speaks on nature’s behalf. It’s a cry out from the vast mountains, the rich forests and the faraway stars that happen to make its way into our ears, reminding us to never take smaller things for granted. While each song is simplistic, you’ll find that it adds to the intimacy that this album will be known for. The debut effort from Birds From Paradise is a bubbly, ambitious collection of songs that puts their foot in the door as one of Canada’s most unique emerging folk-country acts.