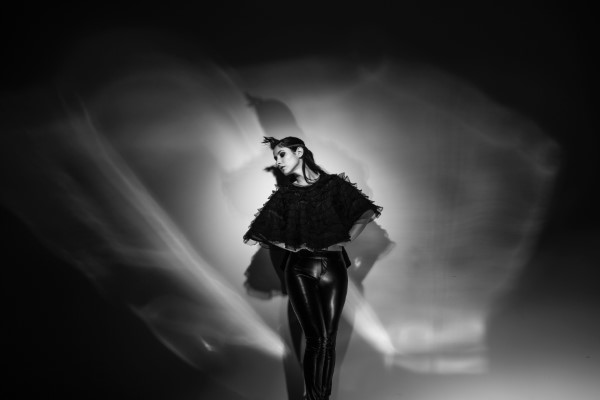 Alt-rockers, Trope are back with a brand new single, “Shout”, following their debut single, “Lambs”, which garnered high praise and positive reviews.

“We wanted to do something different with the song musically and instrument-wise, and balance the beautiful melody and message with the intensity of the guitars, bass and drums,” says Montreal-born, Los Angeles-based lead singer Diana Studenberg. “Due to the song’s pop sensibility and 4/4 beat, it didn’t fit into the Trope realm at the time.

But as things progressed and electronic instrumentation was replaced with organic instruments — including bass, guitars and ebow — the tune took a darker turn and actually really worked for us.”

The band were inspired by the poignant lyrics, particularly the universal message in the lines ‘those one-track minds, that took you for a working boy. Kiss them goodbye, you shouldn’t have to jump for joy.’

“How many of us have been in situations where we’re mistreated and looked down upon by people who just don’t recognize our value?” Studenberg confides. “I believe, in life, we shouldn’t have to placate or put on a clown face and do a fucking happy dance to appease people who behave toxically towards us, and lack the foresight to really see who’s in front of them.

I see this whole song as a reaffirmation of value and strength and of our ability to move past these situations and people towards the things that help elevate us emotionally and spiritually.”

The visuals for “Shout” were directed and filmed by Stewart Whelan, along with the help of an incredible film crew; Whelan’s credits include cinematography on The Flash TV Show and Metallica’s “Some Kind of Monster.”

Check out the video below, and find out more about Trope via our Five Questions With segment.

Hello and thank you so much for the interview and sharing our song to Canadian Beats! My name is Diana Studenberg and I sing in the alternative rock band Trope. I’m a musician, songwriter, and also actor/voice actor.

Trope’s music is largely influenced by a lot of alternative rock music, a lot of 90s influences and more modern progressive music too. The writing style really does vary quite a bit from song to song. Even though all the songs sound cohesive and feel like they’re part of the same album, each song really took a different approach to write. The album is a bit split between songs in odd time changes that are progressive, and then more straight-up alt-rock.

We’re meant to perform in the UK in September, which I really hope can happen if the world gets a bit safer such that people can enjoy live music again. I’d say live, we really try to bring a lot of energy. The drums really come into focus and you can hear all the different grooves, and how drum-centric the music is, which I think is great. So I’d say, live, we sound very rhythm-heavy, the guitars tones change a lot, from really crunchy to clean and warm and more atmospheric with the use of an e-bow. The songs do sit in different emotional spaces too and at times genres, so I find that the set is really diverse enough to not be repetitive but still sounds like one band.

That’s a good question… I’m very biased! I think I’d say Surrogate or Pareidolia. I know that’s two :). Surrogate is a song I’m personally very proud of melodically/lyrically… it was insanely hard to write bc the groove rolls on itself so for a while felt like there was an infinite amount of options. There’s an instrumental part in the breakdown which is one of my favourite parts of the whole album. It’s just really heavy and… it’s not a part that I think comes expected from that song.. it like draws you in and rocks you out, or at least it does for me! I also really love Pareidolia. To me Pareidolia is the ‘perfect Trope song’. It’s weird – it has 5 verses, no chorus and I think there are like 5-time signature changes, and so it’s this odd, evolving song that’s writing-wise very progressive, but it doesn’t sound progressive. It sounds simple and is only like 3 minutes long. I love the theme of Pareidolia too… self-awakening.. trying to get out of the cyclical spin I’d sometimes put myself through.. either by appeasing others at my own cost.. trying to bury down needs and wants… placing trust in the wrong folk. It covers a lot but really centres around self-awareness as the way through the seemingly long dark tunnel. There’s also an instrumental breakdown in the song which I really dig and just how heavy the song is live too. It’s such a fun one to play. Jeez, I could talk on and on about this. It’s like asking a mom which baby she loves the most, prepare for way too much chatter ;)!

There are so many wonderful Canadian artists that I really dig. Growing up I really was into Avril Lavigne, Crash Test Dummies, I also love Gordon Lightfoot, Joni Mitchell! I loooove Joni Mitchell. She’s such a unique, beautiful writer, and just feels like in a class of her own. Big Wreck are amazing and one of my favourite songs growing up was ‘The Grace’ by Neverending White Lights.