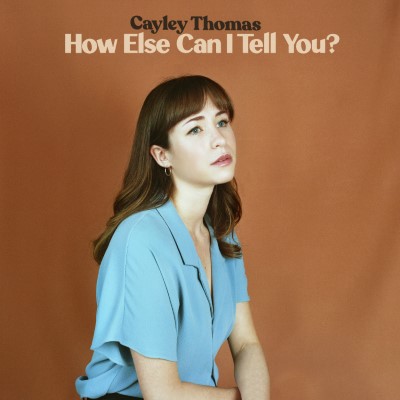 There are precious few occasions when listening to an album that the subtlety of its delivery is what catches the listener’s attention. Many albums attempt to boast a variety of hooks and anthemic choruses from front to back in an attempt to pull the listener into the messages behind the music. Such is not the case on Cayley Thomas’ latest release, How Else Can I Tell You?, nor is it her intent. The Toronto-based singer-songwriter has put together a soothing, reflective, and vividly colourful collection of folk-leaning pop songs on this new record. Each one of the five songs on How Else Can I Tell You? takes on its own distinct emotional tone, demonstrated almost purely through the intricacy and range of Thomas’ voice.

The album’s opener, “Two Minds”, kicks the record off on a sunny guitar riff and a touch of horns around the track’s midpoint. In her wistful vibrato, Thomas reflects on the idea of indecision and the fleetingness of time when she sings, “Isn’t it already too late?/ Everybody’s finished the race/ And you’re just startin’.” “Midnight Hours” shakes things up just slightly as the track affects a slightly darker, more noir-influenced tone in the music. Much of the track rides on a subtle, muted bassline with Thomas taking on a just slightly more ghostly soprano voice,  over-extending some notes to a near whisper pitch. “Sunshine”, appropriately enough, takes the record back into notably lighter territory as Thomas sings to those around us who shed much-needed light on our lives. “I sink a little deeper/ Draw the shades closed one more time/ But you bring the sunshine baby/ Clearin’ up a cloudy day,” sings Thomas, as the clouds eventually part on the track with a huge, shredding, Eagles-esque guitar solo. This album truly stands out on its closing track, however, as Thomas delivers a simple, yet undoubtedly heartwrenching tribute to her late brother on “In a While”. Through the filter of what sounds like a telephone receiver, Thomas, accompanied by only her guitar, reflects on a life cut short and the little reminders of him in daily life that make her write, “Forever and a day/ In my thoughts you’ll stay.”

This latest release from Cayley Thomas is tastefully simple, yet profoundly evocative. Each song is guided by the genuine emotion one can hear in her voice and backed up by simple and elegant lyricism and soothing musical accompaniment. She managed to give herself exactly enough space to be able to really reflect on and express an impressively wide range of emotions, while still remaining both concise and consistent on the album as a whole. This record is a textbook lesson on tight and effective songwriting to say the least.