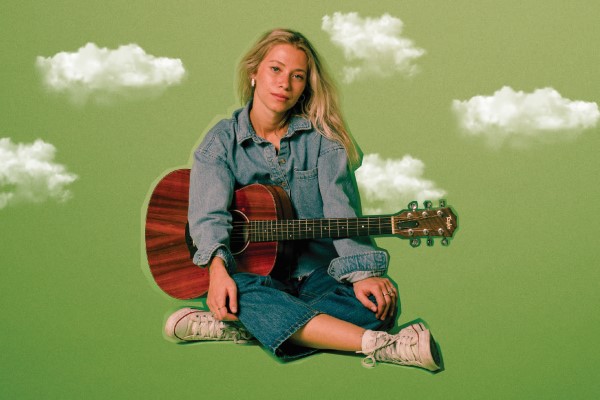 The catchy new song features an infectious beat and relatable lines that the singer hopes will make listeners think back to younger years with a smile.

“There’s something magical about thinking, or even wishing, that you were still as care-free as you were when you were eighteen. That part of your past is still with you now, it’s helped build you into who you are today.”

On top of writing and co-producing the single, Laine – who is also a talented and sought after designer in the Calgary music scene–created the single’s graphics as well as a funky lyric video to accompany the release.

“It’s so satisfying to be able to work on a song from start-to-finish. It’s something not all artists have the chance to do,” says Laine. “We recorded and mixed ‘Eighteen’ months ago, but now the idea of home production feels so timely with everything that’s going on in the world.”

Check out the single below, and find out more about Julianna via our Five Questions With segment.

I am a singer-songwriter and producer from Calgary. My songwriting is heavily influenced by my experiences while living outside of Canada and when I’m not making music, I enjoy surfing and hanging out in the sunshine!

I started off in country music but have recently made the transition to bedroom pop.  Bedroom pop is on the rise in Canada and it has originated from a DIY approach to making music because the songs are recorded, produced, and written from an artist’s bedroom! I have found a home in this genre because it allows me to affordably create music and have full creative control over what my songs sound like and what I release to my audience.

My writing style is very visual, I like to paint the story with lyrics so that the listener can really picture the story I am writing about. On my EP project, many of the songs are written about growing up, nostalgia for youth, and, of course, falling in and out of love.

With the current situation and live shows being out the question, I have spent a lot of time working on my live show and creating an experience that allows the audience to engage with me (once social isolation is over!)

I would describe my show as energetic, youthful, and story-based. As a songwriter, I love to tell stories and I want everyone to feel like they are part of the show. The connection with the audience is the most important thing to me.

Right now, it would be my song ‘Eighteen’ which just came out because it’s a feel-good song written about thinking, or wishing you were still as care-free as you were when you were eighteen. That part of your past has helped build you into who you are today. I think during this difficult time, people need something lighthearted to remind them that life will be okay again once we make it through this.

Eighteen is also more reflective of the style of music I am writing and producing than my past material. I am working on producing my EP right now and there is a song that will be on this project called ‘Remind You Why You Loved Me’ which is one of my all-time favs! I’m very excited for people to hear that one!