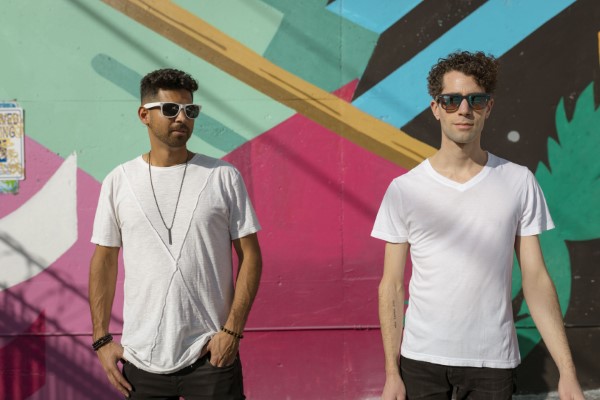 Delta Underground is the new project from Tokyo Police Club’s Greg Alsop and artist, Mike Scala. The band is based out of Charlottetown, PE and Los Angeles, CA, and recorded their upcoming releases in Greg’s PEI studio.

Their debut single, “Where The Wild Things Are” is out today via their own label, Woodland Poodle Records/ ONErpm. The song evokes images that hint at darkness but also excitement and lands in a chorus that refrains “You can always come with us”. An invitation to adventure. This place isn’t dangerous, and these creatures aren’t a threat – they’re here for a good time and they want you to join in.

Check out the single below, find out more about them in our Five Questions With segment, and be sure to stay tuned, as the group will be releasing several more singles in 2020, as they continue to work toward their debut full-length album.

Mike and I started making music together shortly after we had both moved to L.A. We met at a party, hit it off talking about Prince, and from there started writing almost daily.

Not long after, Mike had arranged a trip to Italy with myself and some other songwriters. It was a pretty incredible experience to just be in that place, exploring the Tuscan countryside and these beautiful castle villages during the day and then writing all night.

We only had one acoustic guitar – but we each had a laptop with all these synths and samples on them. So that’s when we really started getting into electronic production. It was just such a different way to create than being in a standard four-piece rock band. To not just think of music as, “what can I do with this instrument” but, “what can I create with all these sounds”?

After that, it just seemed exciting to keep going deeper down the path of electronic music. As a drummer and guitarist, we still love the sound and feel of played instruments and use them a lot in our productions and live show, but it’s been cool to hear those more as textures within a recording rather than as the full core of it.

Our shows are part DJ set, part live performance. We spin stuff that’s in the deep house, future bass, sometimes electro-pop world, and then do a set of originals within that. We have drums, sample pads, guitars, and synths all setup and running through the mixer so we can play on top of the tracks and sort of remix them live.

We’re really inspired by artists like Rufus Du Sol, ZHU, Caribou, Disclosure, and Purity Ring that all have that live “played” element to their shows. It adds so much musically as well as visually – just to see a drum being hit or a guitar being strummed and hear the music being effected around it. I love that.

Unfortunately, our dates have all been postponed till the pandemic situation clears, but we’re really looking forward to getting back out there when we can eventually.

“Where The Wild Things Are” is our first single out, so please give it a spin. Or two. Or twelve. 🙂

I’m very into the new Caribou album. I’ve loved all of Dan Snaith’s work over the years, but this album really grabs me. There’s an intimacy to these songs that I haven’t always felt in his past work – a lyrical truth. I’m not huge on song lyrics having to make total sense or state outright what the song is about, but I do think they have to mean something to the songwriter in order for the listener to really feel something. This album connects with me in that way – it feels “felt”.

Ekali is making some amazing and progressive music. The production in his songs are so innovative and unique – it doesn’t hold itself to any specific genre and I love that. The new album is fantastic and I’m always excited to hear what he’s going to put out next.

I met Russell Louder here in PEI last summer. Incredible artist and just such a talented songwriter and producer.  An awesome and captivating performer as well. I can’t wait to hear the album that’s coming out later this year.