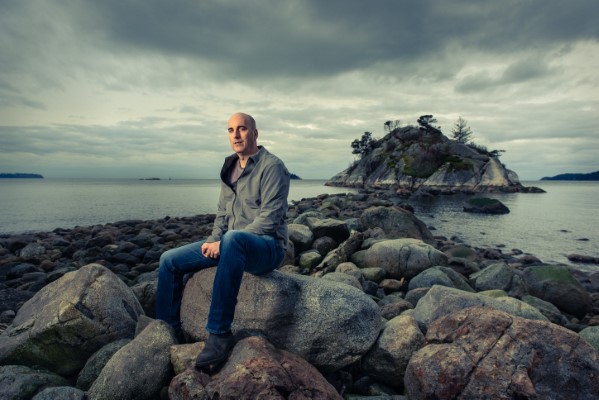 Vancouver, BC-based folk-pop musician, Robert Guess is back with a new single, “Cool Heart” from his EP, British Columbia. The EP is co-produced by Andy Schicter at Park Sound Studios in Vancouver, and the four songs are buoyed by string and horn arrangements, written by his long-time collaborator, David Rogers, and performed by the Black Dog String Quartet.

Check out “Cool Heart” below, and find out more about Robert via our Five Questions With segment.

I’m an American singer-songwriter based here in Vancouver since 2011.  I was born in New Jersey and moved to South Florida in my teens, bouncing around the Florida music scene as a solo artist and fronting a handful of folky eclectic rock bands.

I’ve released six albums over the years, the first solo album getting a good amount of radio airplay around the US. I went on to front Water-Cure, an eclectic rock band in Tampa,  Florida and The Letter Green, a solo vehicle in Los Angeles.

I spent 8 years in Hollywood amongst the storytellers, animators and producers making the commercial art we consume.  It was an educational experience to say the least and taught me a great deal about what is possible with art.

I relocated to Vancouver (for love) and now back with British Columbia, a 4 song EP of folky pop songs about loving yourself when you don’t think you can.

‘Cool Heart’ is the first single and is available on April 30th on streaming services everywhere.

My songs are very much influenced by 70s AM Radio and the great songwriters of our time.   I’m a huge fan of Neil Finn (Crowded House), Paddy McAloon (Prefab Sprout), Paul Westerberg (The Replacements), Lloyd Cole, and Bruce Springsteen.  (to name a few)

The songs on my British Columbia EP are about universal emotions, seen through the lens of cinematic characters seeking peace and truth, but not knowing how to get there.  They’re thematically aligned to what I’ve been writing about for some time, a battle between ego and spirit with spirit ultimately winning.

I try to wrap that up in a catchy and memorable song that’s relatable and authentic, and hopefully inspiring, especially to someone in need.   Right now, I’m thinking about a lot of us in need as we’ve never been so far apart but so deeply connected.

Sadly, the quarantine has put many of us on a show lockdown, but hopefully, that will change soon.   Looks like virtual shows are it for the moment.   My co-producer Andy Schichter at Park Sound Studio has been doing this really well for the past month to raise money for artists, so you should check that out.

Live shows are mostly acoustic, but looking to bring some ambient instrumentation when I get back out there.   Coming soon!

I’d recommend ‘Cool Heart’ which is a great representation of my music.   Acoustic folk songs with a spiritual-not-religious bent wrapped in great performances by some of Vancouver’s best musicians.

As far as Canadian musicians, I’m a big Ron Sexsmith fan.   I’ve loved his music for as long as I can remember.   He was a big influence on me as well and represents the best of Canadian music.   Check out his new album ‘Hermitage’….another great one.