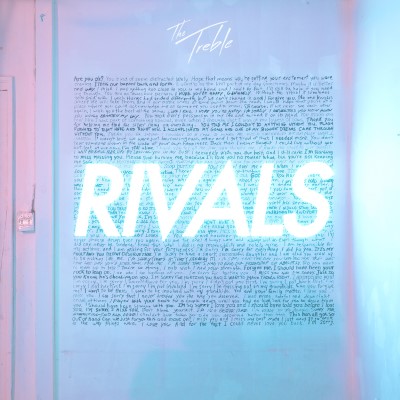 Music is transient by nature. It is constantly influenced, pushed and pulled into different places by people with different values and worldviews. Jazz in America may technically be the same genre in name as jazz in Japan, but the way that sound is demonstrated and interpreted will be varied, for example. Similarly, an artist may see their own music changing over the course of years, unconsciously being moulded by the experiences and developments undergone by its composer. The Treble have spoken directly to this point regarding their music as reflective of the experiences one goes through during their 20’s. The band’s latest record, Rivals, the follow up to their 2017 debut, Modernaires, sees The Treble on the other side of a significant change in their sound and embracing their newly discovered identity.

In general, this change serves them well. On Rivals, the band takes a bold step up into a much more electronic, hook-heavy alt-rock sound. Every song is deep with layers of shimmering synths and smooth basslines all bound together by the dynamic voice of singer Mark Brusegard.  Tracks like “Eyes on Us”, “Saturday Night”, “Dangerous”, and “Fix Of You” are instant radio hits, boasting explosive choruses, and strong hooks that strike a vein similar to bands like Imagine Dragons and Bastille. The record maintains pretty good pacing as well, with tracks like “Rivals”, “No Secrets”, and “All The People” giving some breathing room to Rivals. “No Secrets” immediately grabs you in with it’s dark, groovy bassline. “Rivals” and “All The People” also contribute a very interesting industrial, almost Depeche Mode-leaning sort of dark electronic aesthetic to the record.

This shift in The Treble’s sound from more traditional-sounding indie rock to this highly produced, more explosive form is undoubtedly well-executed from a technical standpoint. But in terms of content, it feels like a lateral move. Comparing songwriting from Modernaires to Rivals, the step up from the first album to the second is a bit lost. The scale and grandeur of The Treble and their music were upgraded with this record, but unfortunately, the soul and strong songwriting that can be heard on Modernaires did not receive the same treatment. Perhaps these are simply growing pains of creating a new sound.